One of the most famous trademarks of the 20th century is of a dog, perhaps a terrier mix, looking at a gramophone horn, head tilted quizzically. It’s from an 1898 painting called “His Master’s Voice.” Whenever I recall it, I think of the Coop belief in owner democracy, the vital role of the Member’s Voice.

This branding image was based on an original painting by Francis Barraud of Nipper, a dog he inherited from his brother Mark.

The painting was sold to HMV, an early English recording company. Later the portrayal became a logo for the RCA Company in the United States. The picture was marketed in such a way to suggest that RCA recordings were so lifelike that the dog could not distinguish between the sound of his master’s voice on records versus real life. Years later, the Memorex cassette tape company used this idea with their, “Is it real or is it Memorex?” campaign. 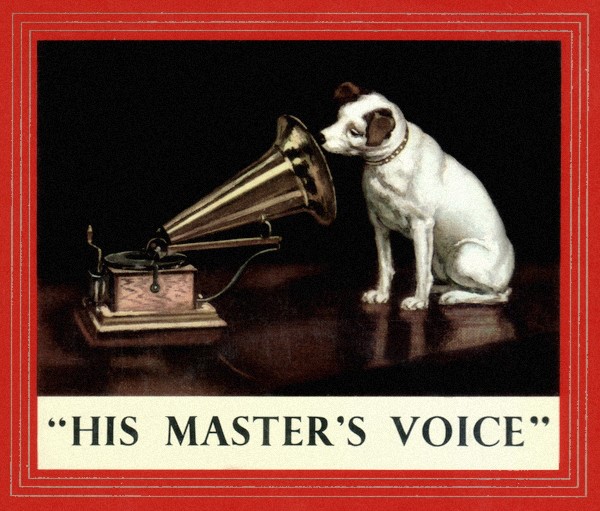 But there is another connotation in the phrase “His Master’s Voice” suggesting a deeply ingrained master-servant loyalty relationship.

Unfortunately that interpretation seems more appropriate when reviewing how the “Member’s Voice” is seen today by many CEOs and boards in credit union mergers. That voice is unwanted and unheard. The relationship is not member-owner, but master-servant. Loyalty expected, but not requited.

A Member’s Voice In High Fidelity

Following is one member’s continuing frustration with his post-merger experience in an email shared with his peers:

“Then there is our favorite subject of the credit union merger. The bill pay system they use — to put it bluntly — really sucks. This system requires you to set the date the payment will be issued, leaving you to guess when the payment might be delivered. There is no unique tracking number to trace individual transactions via bill pay as there had been in my former credit union. I cannot think of *any* system I have ever used involving financial transactions that did not afford some way to distinguish one payment from another to the same payee.

“Considering that this merger was not necessary or advantageous to members, I see this as one major reason it would be best to leave smaller credit unions the hell alone and let them do what they were chartered to do and what members expect them to do. Again, if individuals think their institutional management skills are such they wish to enjoy the perquisites their commercial peers receive, then they should go find a for-profit outfit to destroy and live the life of Riley (or maybe Jamie Dimon).”

I wonder if anyone hears these howls? Maybe it’s  time for a cooperative Roaring Kitty!