Most Rensselaer residents do not live there to seek fame and fortune.  They value  the intimacy of  community, relationships going back generations and the shared experience of earning a living through one’s own skills.

It opens every Saturday from 7:30-11:30.  Each participant pays $10 for a parking space size stand on the County Courthouse square.  Or one can pay $40 for the entire season. 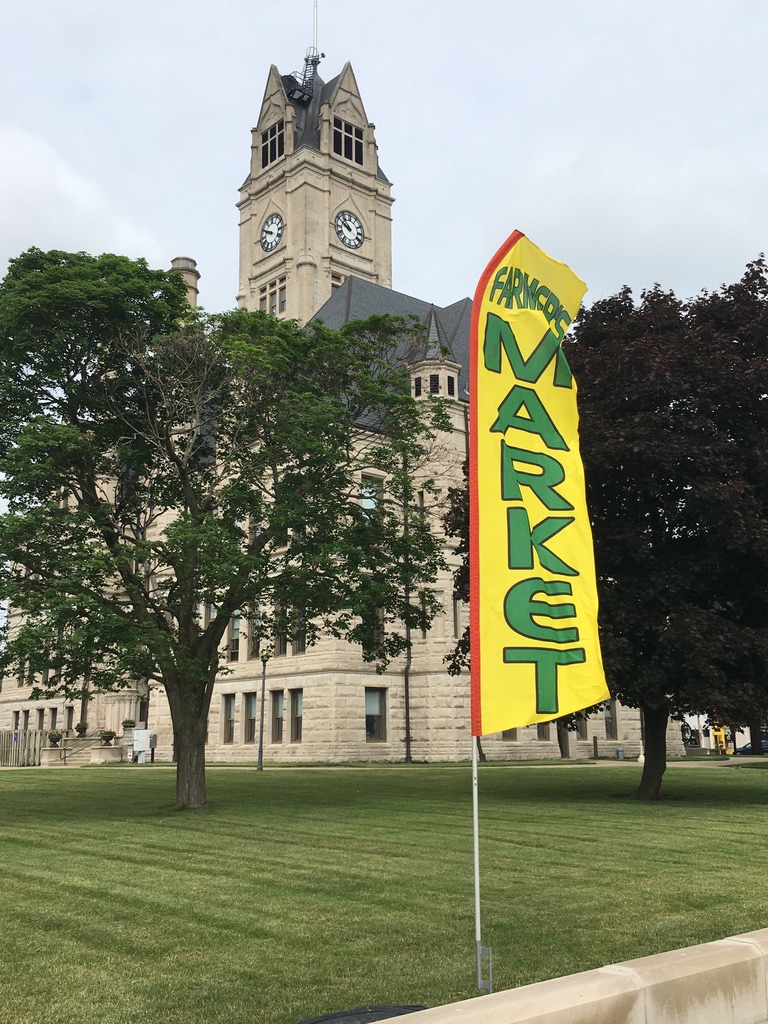 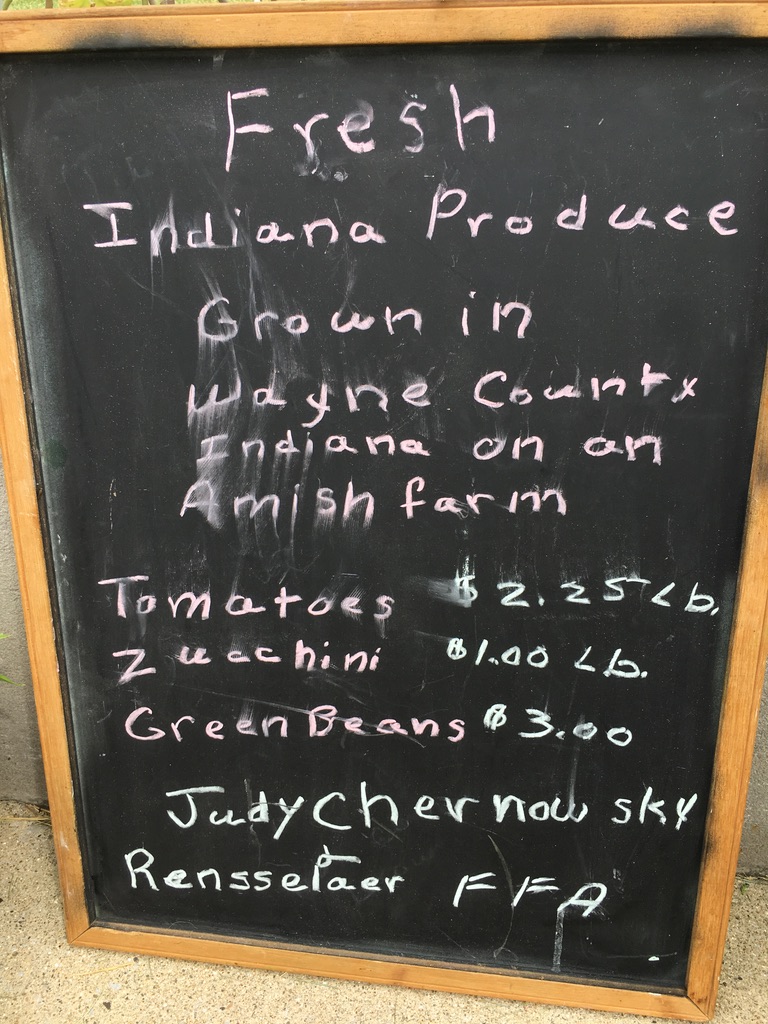 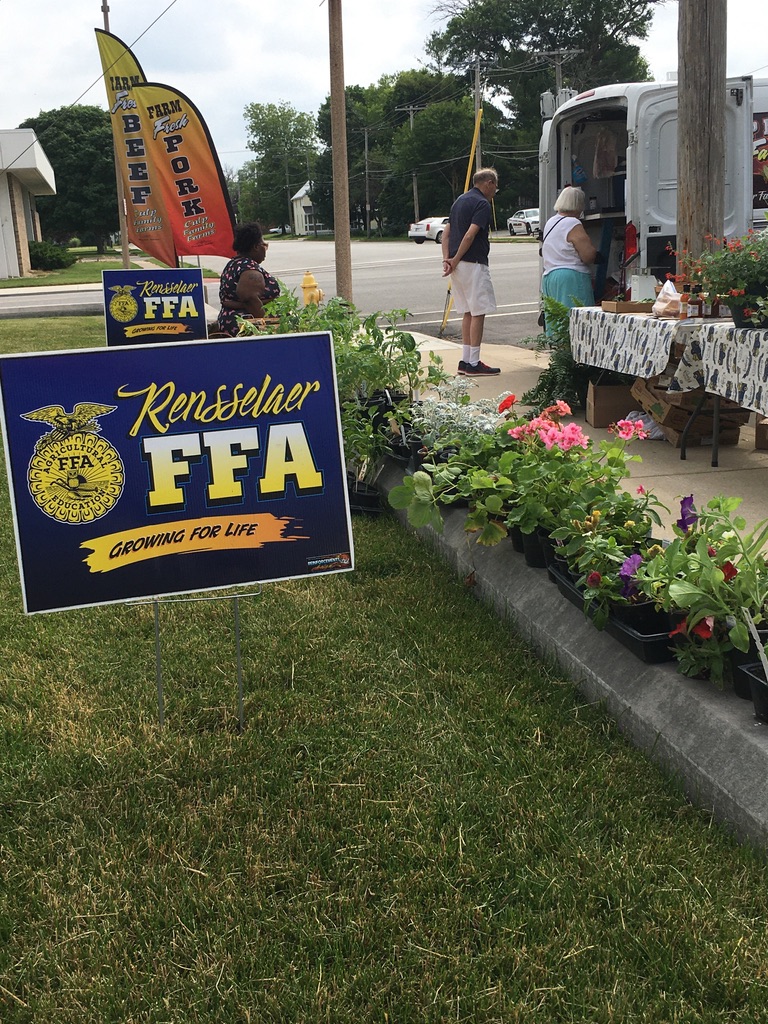 The Market is self-managed (a coop model) with  a two-page Policy and Vendor contract.  The purpose reads:  The Framer’s market is to provide a retail business outlet (not wholesale) for local growers/producers of goods or to market their products. Established retail businesses are ineligible under Market policies.

There is an annual Call Out meeting in early spring to approve the policy and  contract which each vendor signs.  All must be full time residents of Japer County or an adjacent county, be 18 years of age or accompanied by an adult.

The Market Master is Brandy Luttrell who monitors the operations each Saturday, collects the $10 fee and insures the rules regarding signage, cleanliness, sales tax and booth locations are followed.   Prior to becoming the Master, Brandy was herself  a vendor. 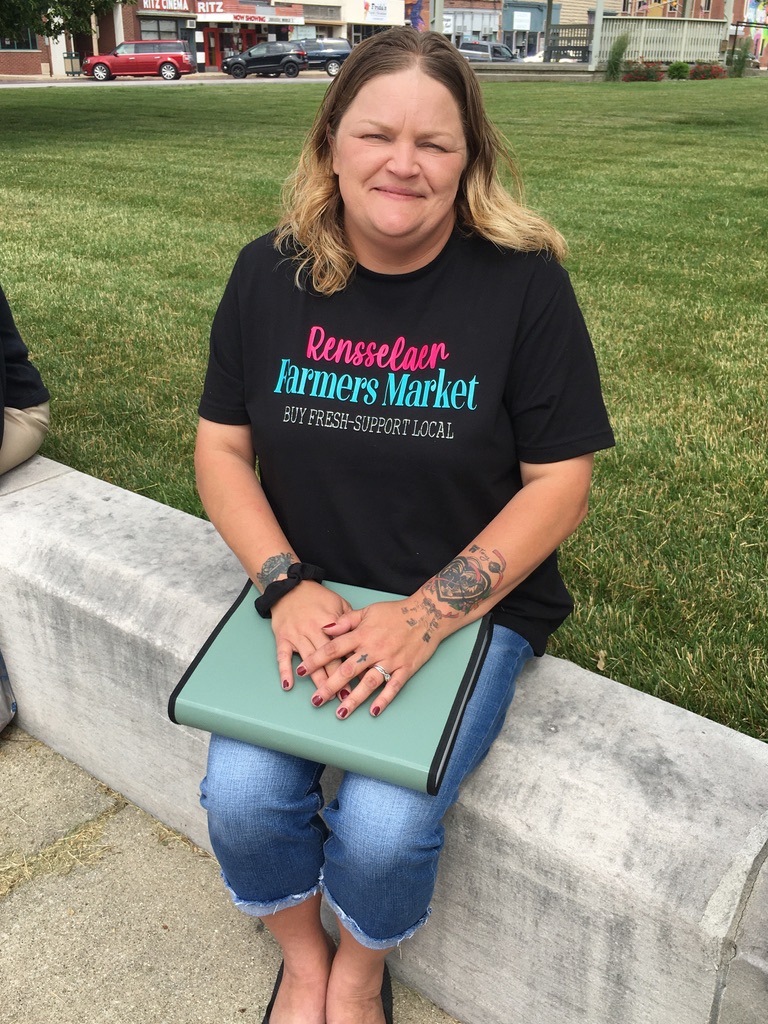 Stephanie Davisson’s booth was the first in line the Saturday we visited.   She grows and sells flowers,  Lavender Lane cachets both dried and fresh.  But this is just one of her many local endeavors. 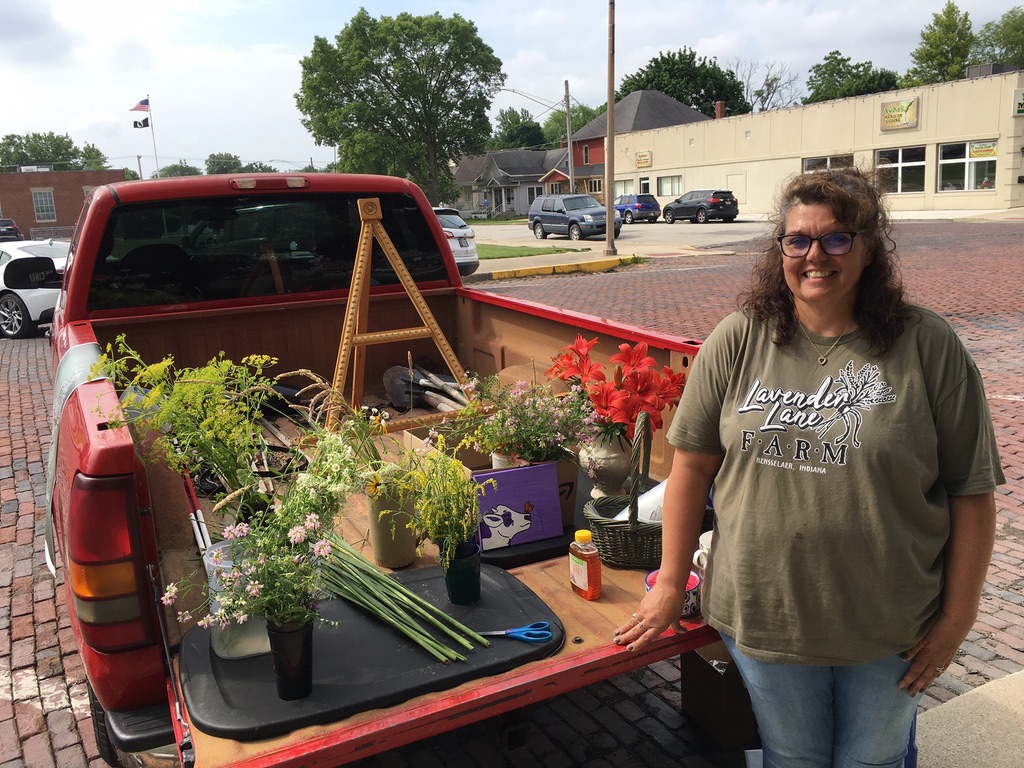 She is the choral instructor at Rensselaer High School.   Another responsibility is the Youth Leader and church organist on Sundays at the First Presbyterian Church. 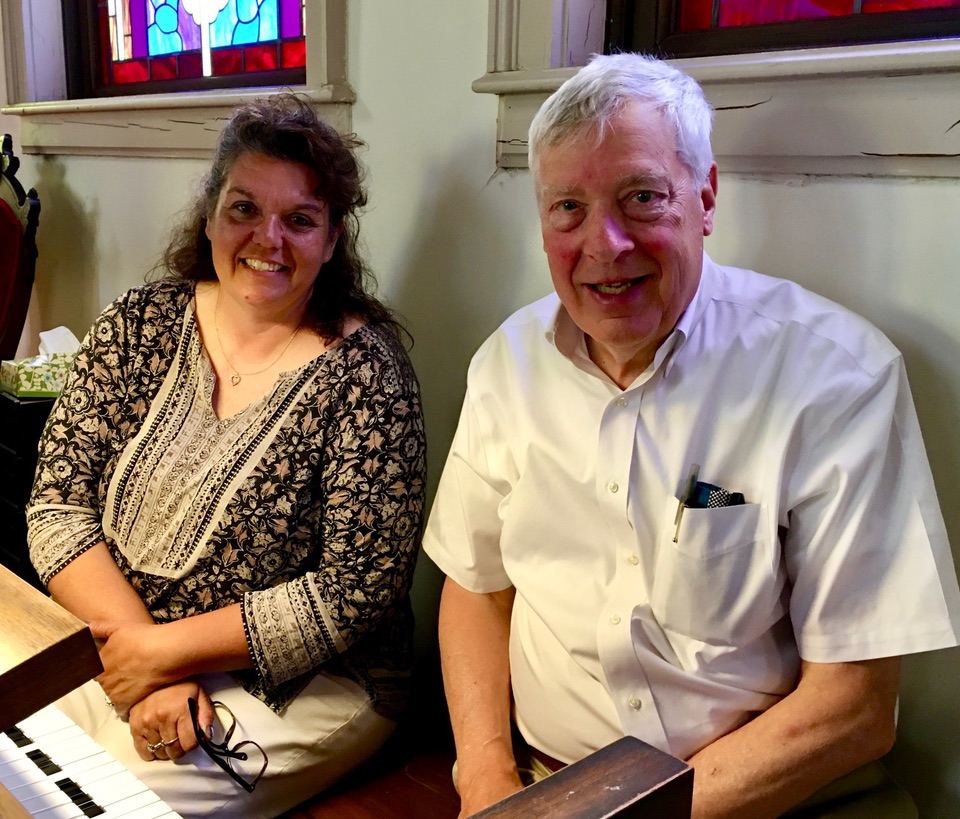 Her Rensselaer roots go back generations.  Her father-in-law is Terry Davisson who was my sister’s classmate in 1961. He was accepted at West Point but left after his father died.  He played football at St. Joe’s and tried out for the Dallas Cowboys.   I was next to him at left end when he was on offense as left tackle. On defense the coaches positioned him opposite the other team’s toughest player whether that was as a lineman or linebacker. 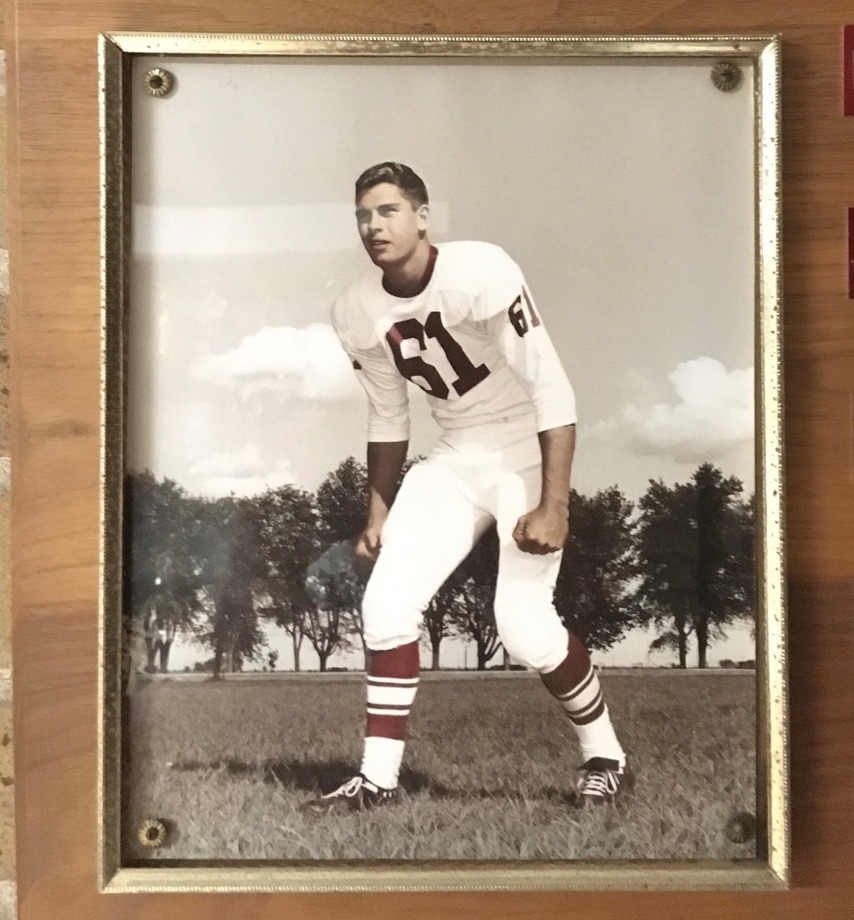 Terry died in an auto accident  in 1977 at the age of 34. RHS established an annual football memorial scholarship award which reads: In honor of Terry Davisson former Rensselaer athlete, teacher and coach for his desire to instill in young people the dedication to live up to their potential, now matter what their potential was.

The Adam’s family booth is two sisters.  They sell seasonal produce from their 5 ½ acre farm to earn money in the summer.   They also raise rabbits, ducks and chickens for eggs, goats for milk and other occasional  small livestock.  The girls do the farming as the parents both have full time jobs. 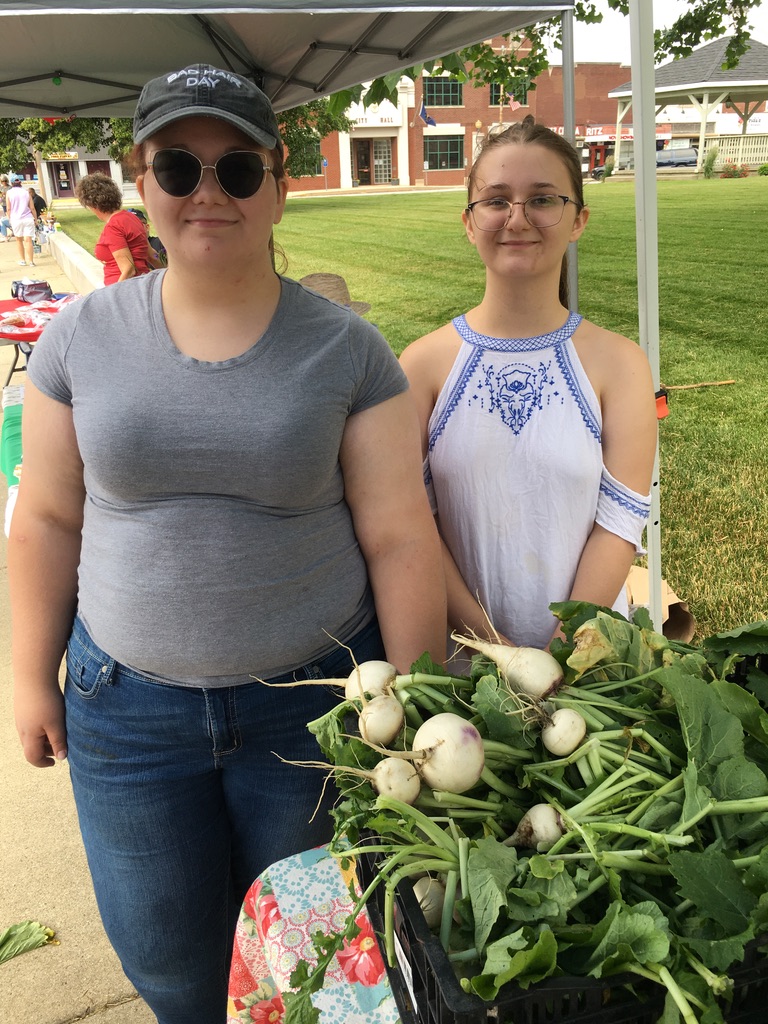 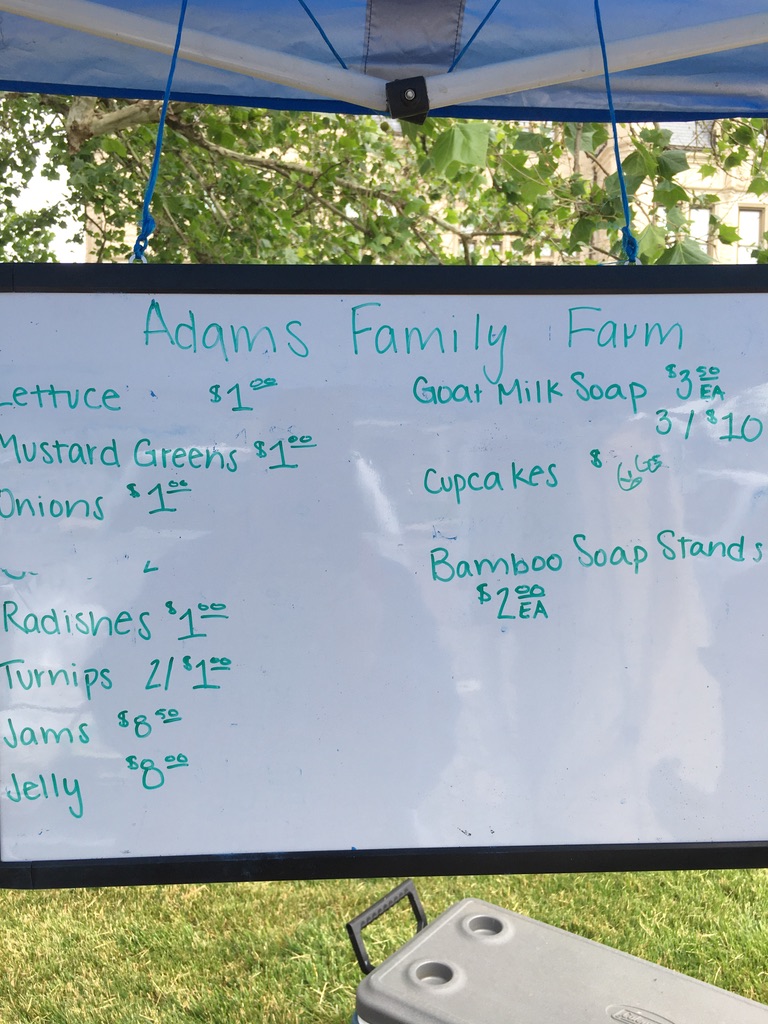 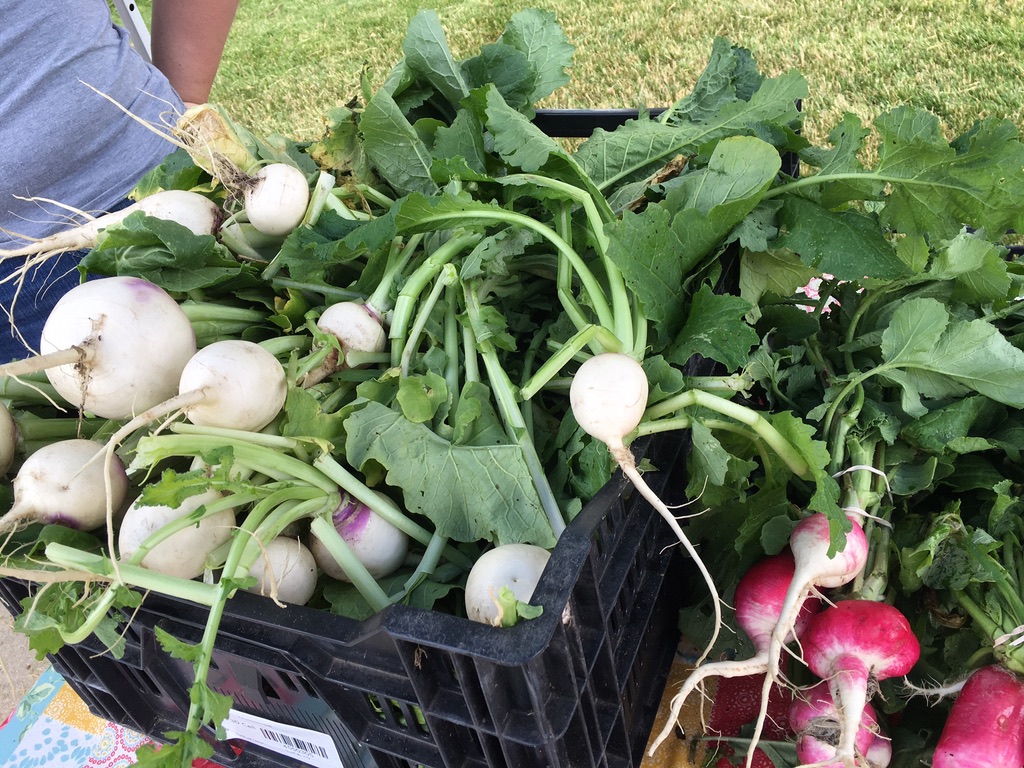 One booth sells  frozen meat.  The price list shows  the marks  of inflation! 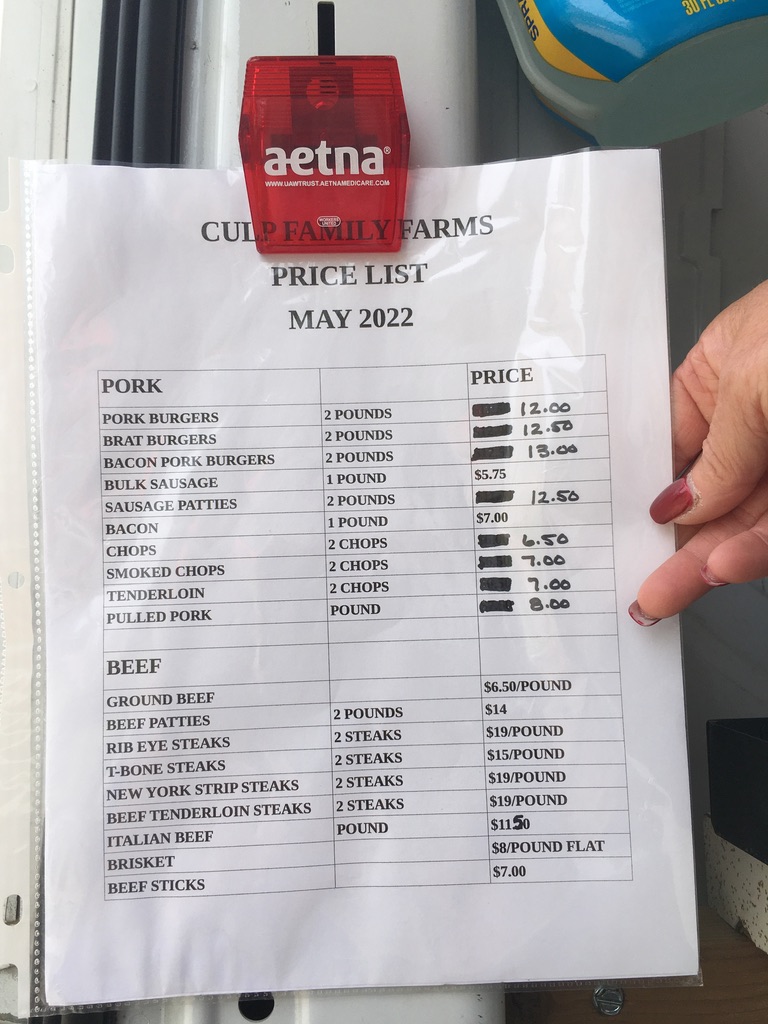 Working while waiting for sales. 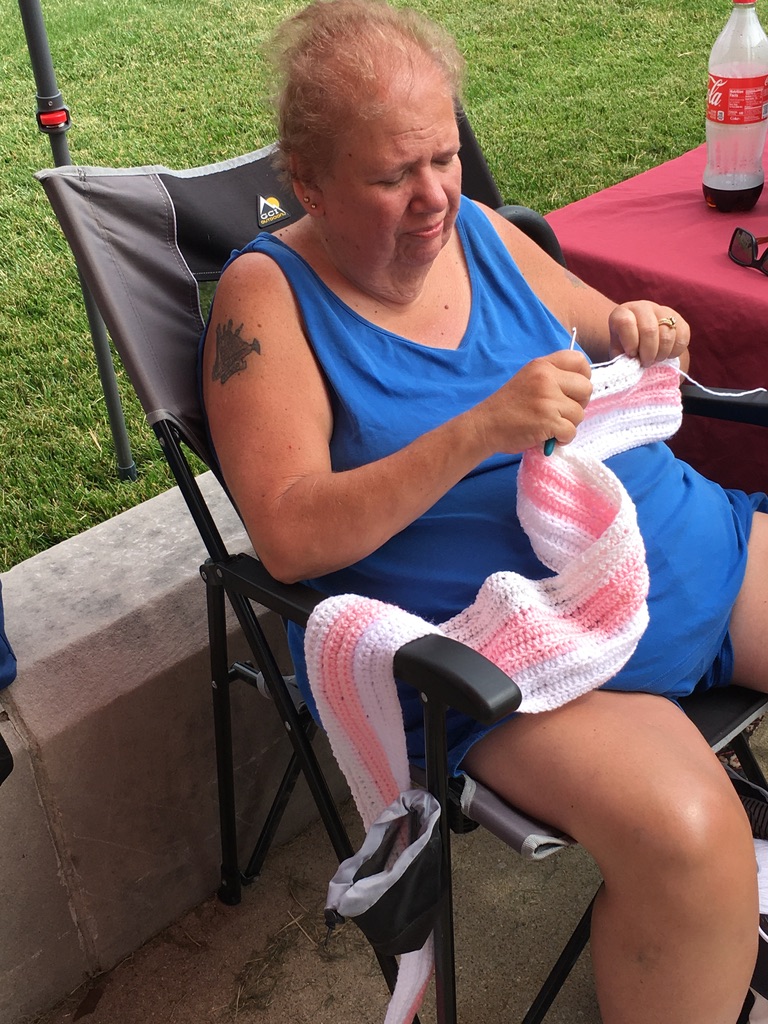 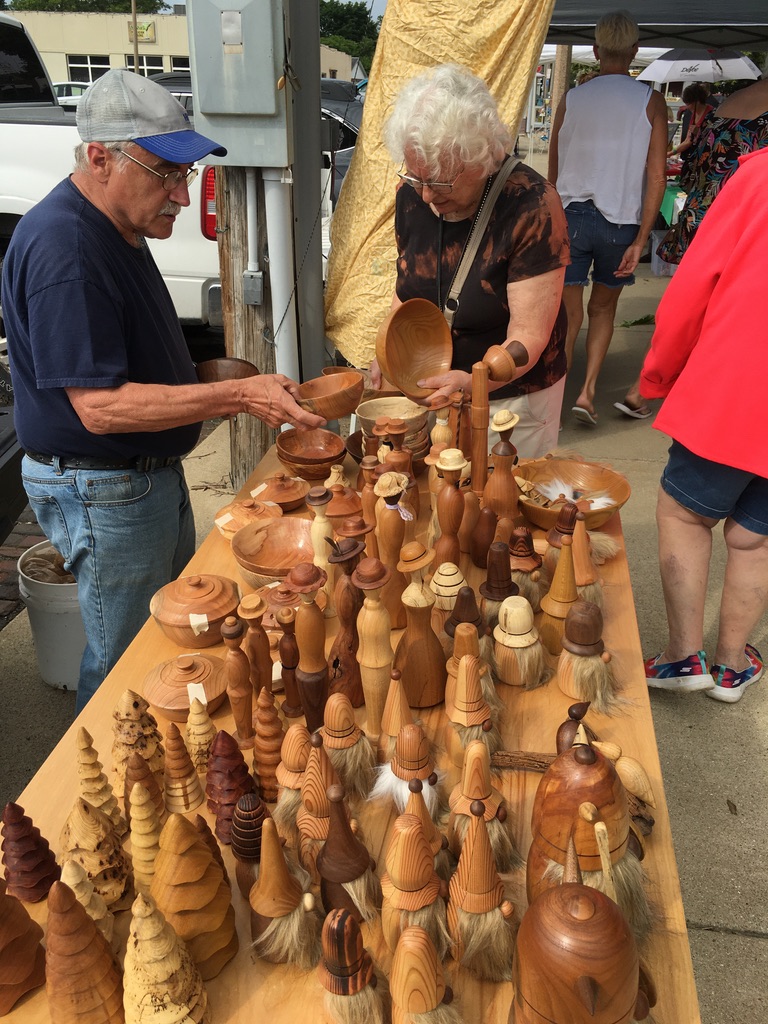 Baked goods and jellies are numerous.  I bought a bread loaf, biscotti and dandelion jelly. 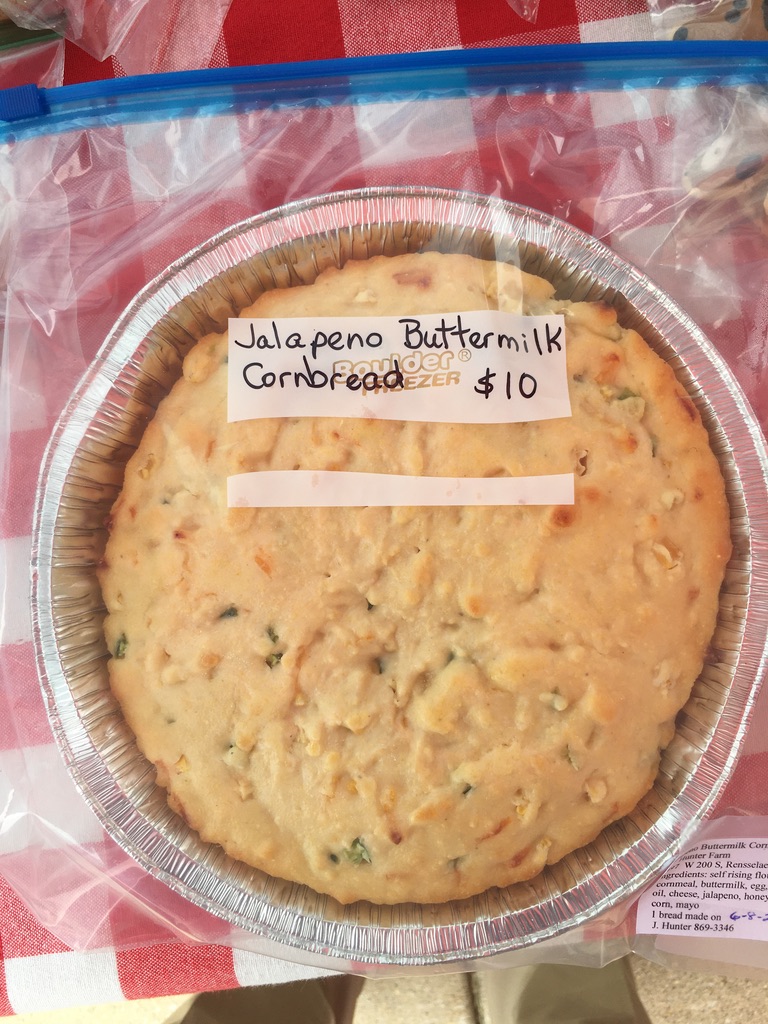 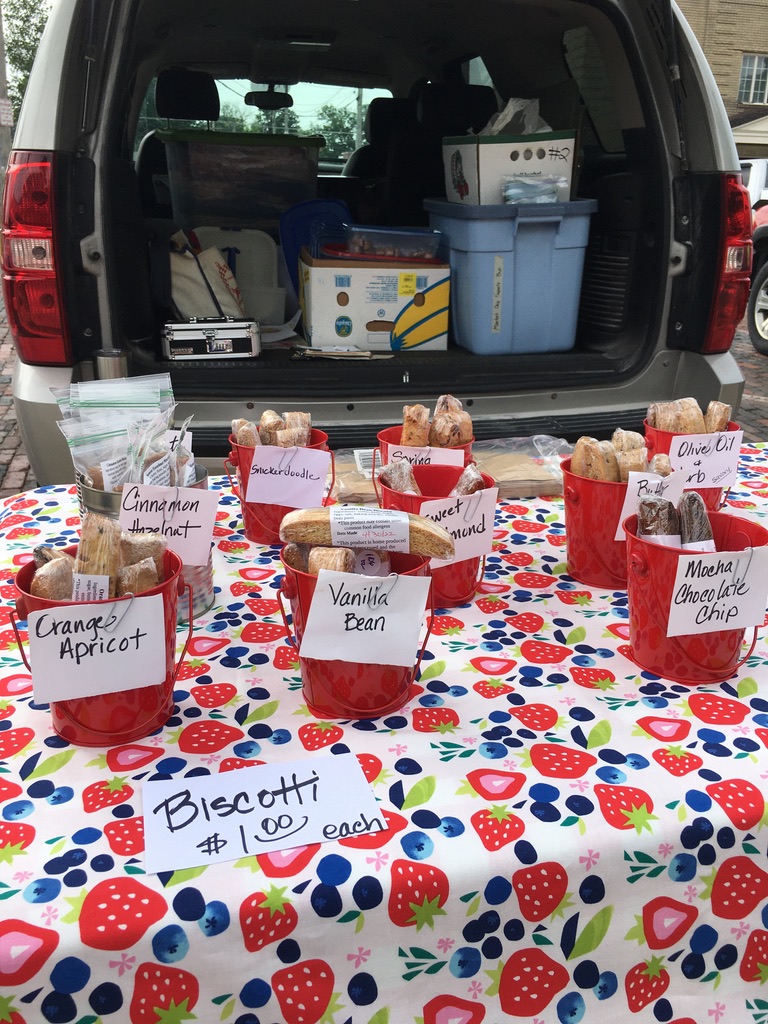 Homes for birds including one in denim. 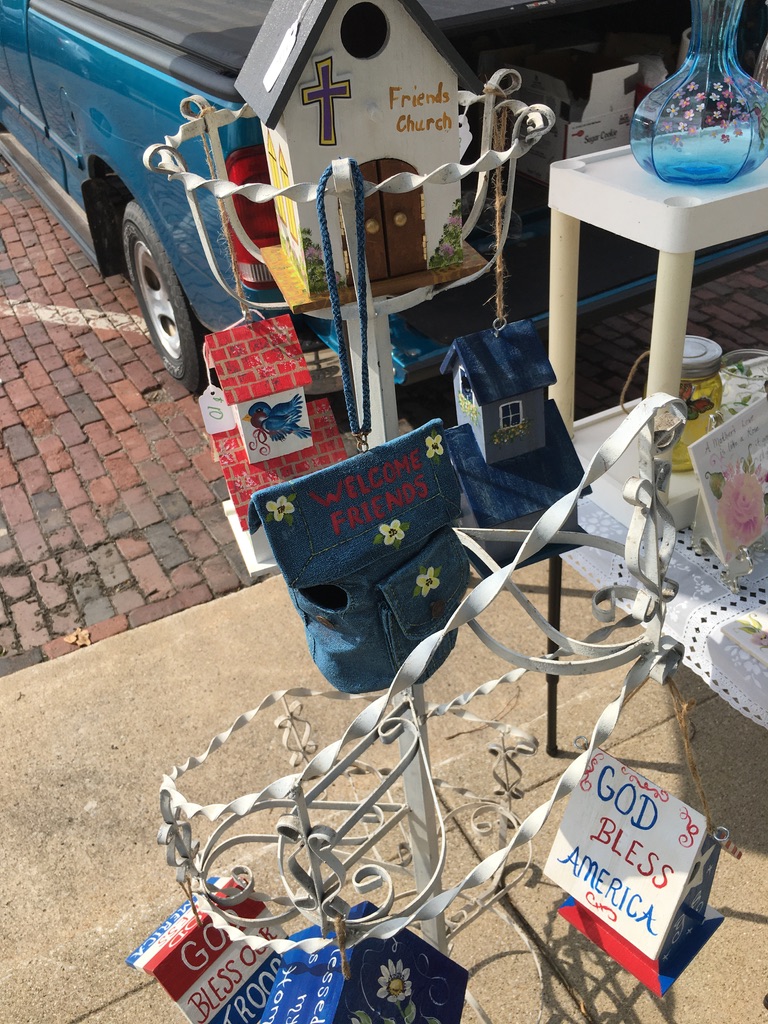 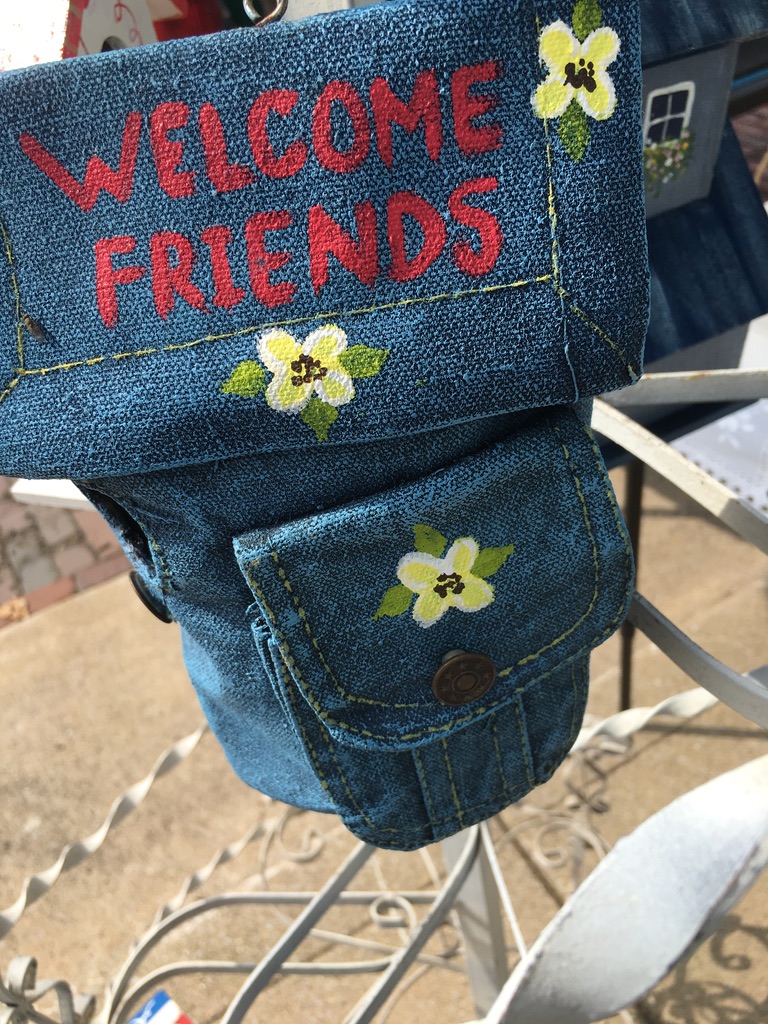 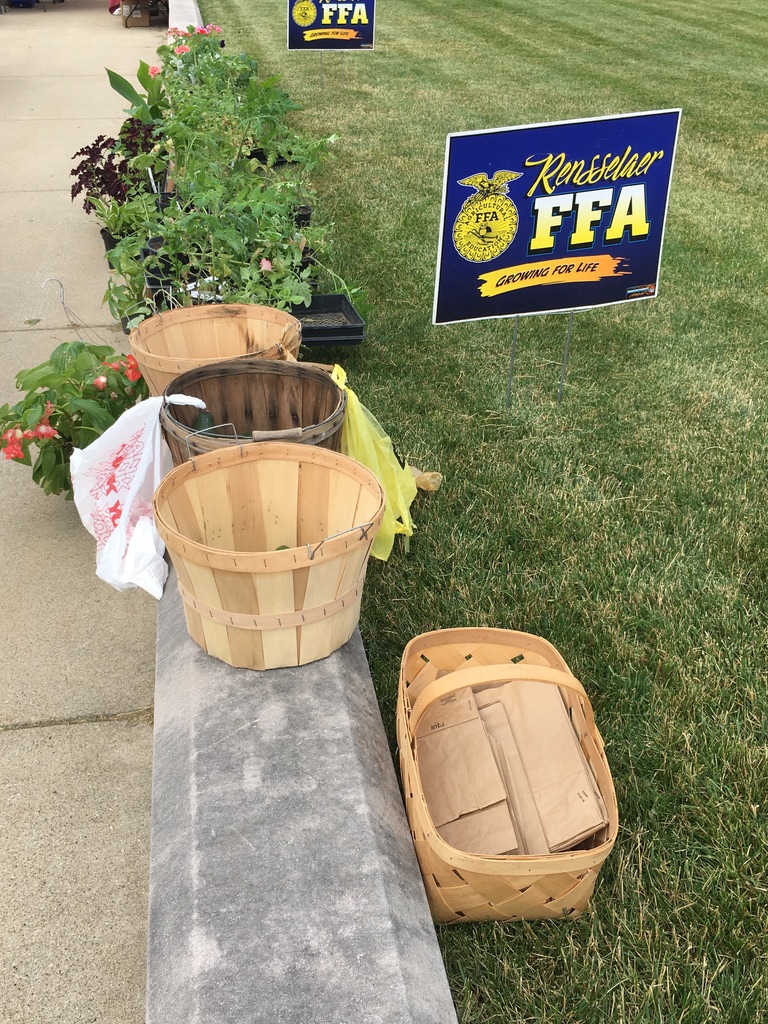 This brief Saturday commerce event is a microcosm of the larger town. We bought our share of local goods, but what we remember most was the conversations.   People are enthusiastic about this opportunity to show and sell their handiwork, and talk.

One Reply to “Rensselaer’s Farmer’s Market”