(Part 2 of 3 on  the  NCUSIF, A Better Way for credit union share insurance)

Throughout the NCUSIF redesign effort in 1984, credit unions had one primary concern with the new concept.  The question was, “If we send this money to Washington, how do we know government just won’t spend it?”

In response the legislation and implementation included multiple guardrails to prevent misuse of the fund by NCUA.  This included a legal cap of 1.3% on total fund size, after which a dividend must be paid; a limit on assessing premiums;  an annual independent  CPA audit following GAAP accounting; monthly public financial reports to the Board; the ability to withdraw the 1% deposit and a commitment to use the fund to minimize losses through 208 and other forms of temporary capital assistance.

Credit union concerns were well-founded.  The NCUA has become increasingly agile in charging the NCUSIF for its operating overhead expenses.

Prior to the OTR change in 2001, the fund had never paid more than 50% of NCUA’s operations.

The Fund’s primary expense is for administration not insured losses 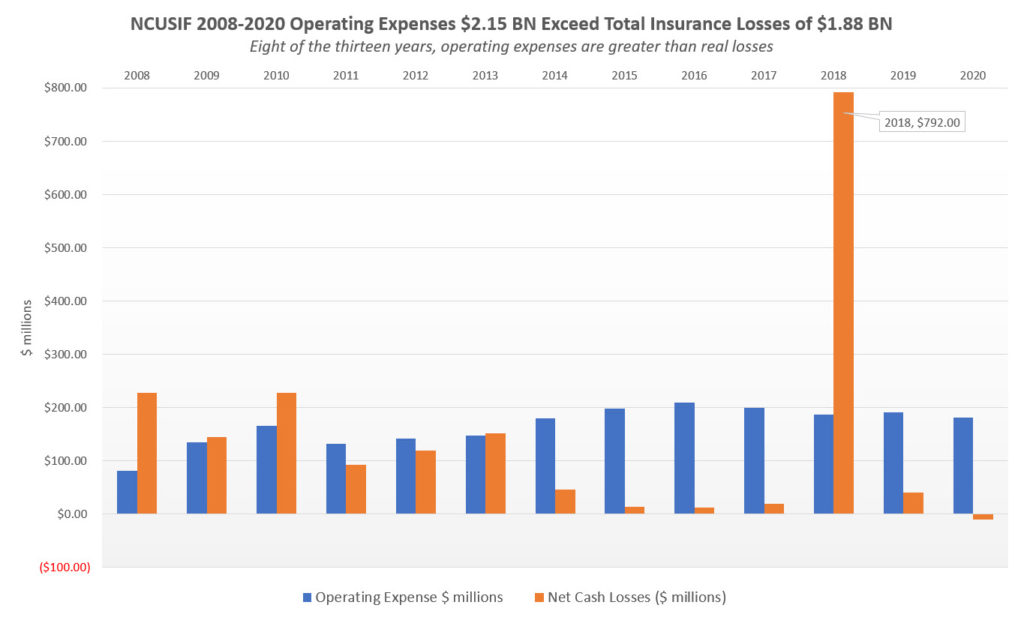 As a result, since 2008 NCUSIF’s operating costs exceeded the insurance loss provision expense of $1.880 billion by $270 million.  The primary financial role of the fund is to pay for insurance losses.  The cost have  been primarily through the Overhead Transfer Rate (OTR) process.  This process has been a source of ongoing  manipulation starting  in 2001.

This 50% ratio remained constant until 2001.  Dennis Dollar, as an NCUA board member and Chair (1997-2004),   made two changes in how the NCUA managed the NCUSIF. The first was making the OTR an annual adjustment, versus a fixed 50%  and secondly, delaying the recognition of the 1% deposit when calculating the yearend NOL.

The first change as reported in footnote 8 of the 2000 NCUSIF audit under the heading, Transactions with NCUA Operating Fund:

The only explanation for the change was that a new study of staff time spent on insurance versus supervision “indicated the rate should be changed to 66.72% for 2001.” ( Page 31 NCUA 2000 Annual Report)   This 33% increase in the transfer was at a time when state chartered  insured shares were only 44.6% of total NCUSIF insured risk.

The OTR has been the topic of contentious congressional hearings plus countless credit union objections to the arbitrary nature of the process.  See this link for congress’ questioning the OTR.  Even board members have expressed puzzlement with the explanations for how the transfer rate is determined.

The second change made in 2001 also had an ongoing consequence to the fund’s financial position and credit union’s dividend payment.

In 2000 the Normal Operating Level (NOL) was calculated as follows in footnote 5, Fund Capitalization:

This was the method used in all the fund’s preceding years. Subsequently dividends of $99.5 million associated with insured shares as of December 31, 2000 were declared and paid in 2001.

But then this NOL calculation,  a consistent process  since 1985, was changed by the Board in 2001 as explained on page 21 if the Annual Report:

the deposit adjustment credit unions submit to the Share Insurance Fund to maintain their required deposit level of 1 percent of insured shares is not recorded until March 2002. In March, the equity ratio moved above the normal 1.3 percent operating level established by the Board.

This delayed recognition allowed the NCUA to omit the required dividend in 2001 because the actual ratio exceeding 1.3% was not recognized until March.

Since the redesign of the NCUSIF’s in 1984, the adjustment to the 1% deposit had always been collected after yearend (as is the case today), but  still recognized in full when calculating the  December 31 NOL.

This change was discussed in the audited footnote 5 which revised the previous 2000 NOL calculation as follows:

Thus the NCUA board gave itself the flexibility to delay recording the 1% true up versus continuing an  established and clearly understood ratio computation followed for almost 20 years in NCUSIF’s audited statements.

The Impact on the NCUSIF Financial Reports

The annual change in OTR from the long standing 50% and the delayed recognition of the 1% true up have given NCUA greater access to NCUSIF funding.

Since 2008, the operating expenses allocated to the NCUSIF have grown at an annual rate of 6.9%.   In contrast, following the change to a “variable” OTR, the operating fees paid by federal credit unions have increased only 3.6% demonstrating NCUA’s  increased use of the NCUSIF for its total budget.

The graph below shows NCUSIF operating expenses are almost all due to the Overhead Transfer with a different rate set each year. 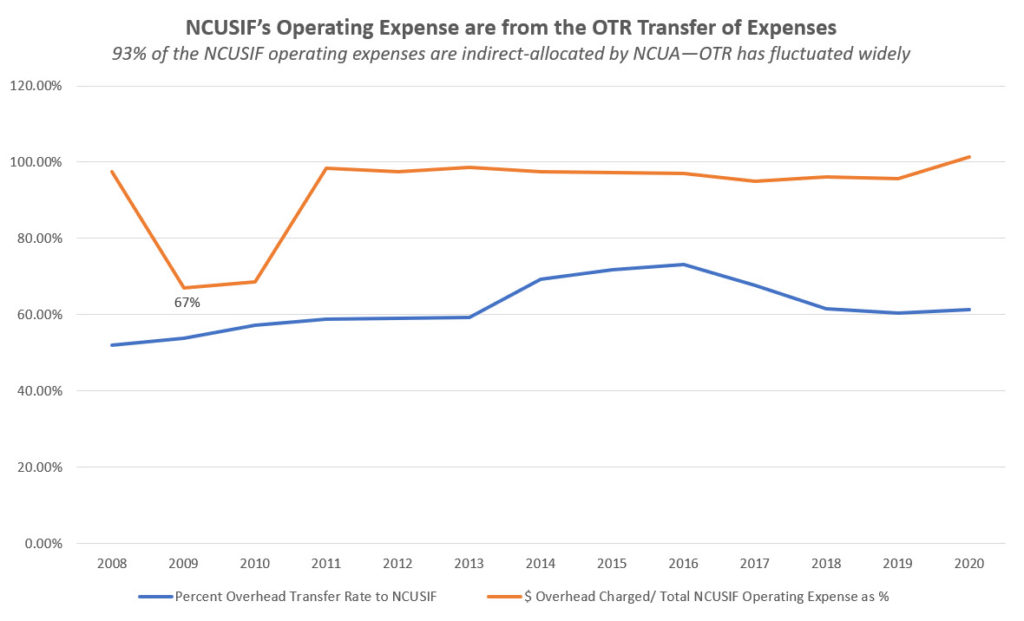 Regaining Accountability for the NCUSIF

Credit unions were prudent to worry about NCUA’s instinct to spend money under its stewardship.  The NCUSIF is meant to be a financial safety net for the cooperative system. Instead it has been converted to a cash cow  anytime NCUA wants to reach in for more money via the allocation process.

Dividends that would have been paid under the 35- year long-standing 1.3% NOL cap were eliminated when  NCUA simply raised the cap to 1.39 in 2017 and 1.38 in subsequent years.  As many commentators pointed out, there was no objective  data supporting this change.

NCUA’s annual open-ended expense draw compromises the Fund’s primary role as a resource for insurance losses. Before the OTR change in 2001, the NCSIF paid six consecutive dividends. This kept NCUA’s commitment that credit unions could earn a dividend on their 1% investment in years of negligible losses.

Now NCUA takes their toll off the top rather than being limited to 50% a number which aligns with the proportion of state-chartered NCUSIF insured shares.

It is the NCUA board that made the above changes.  Accounting standards can accommodate different ways of presenting financial information.  These statements reflect management decisions, not accounting truths.  The changes in practice described about were not  in the best interests of credit union owners.  Auditors present, but do not approve such decisions.

NCUA’s 2022 budget is up for debate and comment.  The OTR should be set to reflect the proportion of state insured shares, not some opaque, manipulated internal study.  Expense control is a critical for  the proper management of any organization but especially a fund set up primarily to pay for insured losses.

Credit unions  have a duty to  speak up so the Board can right this series of decisions shortchanging the fund’s owners today.

Tomorrow in part 3 I will review the history of NCUSIF losses  to  analyze whether the long standing 1.3% cap and 1% deposit design provide sufficient financial resources for the fund.