PenFed’s 2020 Annual Report is a wealth of detail especially in the auditor’s report. Page 53 footnote 9 lists the $542 million net, of property and equipment purchases owned by the credit union.

Two items stand out. Of the over $400 million spent for computer equipment and software, 80% is for software. This affirms the maxim that managing a credit union’s in-house technology solutions entails a never-ending cycle of reinvestment.

But it was a new item listed in 2020 that caught my eye. A total of $10.5 millions for “aircraft equipment” which I assume means an airplane. That amount could buy a lot of plane. Similar to other technology investments, ownership is just part of the cost. There is maintenance, pilot’s salaries and operating costs.

Not sure why a credit union should have its own plane. Perhaps it could be used to survey the credit union’s national field of membership acquired in its merger with Progressive Credit Union.

This purchase reminded me of two prior credit union airplane stories.

“The hundreds of thousands of refugees from the New Orleans and coastal areas who were arriving in the Baton Rouge area had immediately started overloading the entire financial services capacity of Baton Rouge. One area of critical need was cash-regular cash money.

“Although much of Baton Rouge was operational, the entire telephone grid was either damaged or overloaded with attempted calls. As a result, POS terminals, credit card terminals, and ATMs-the great majority of which use dial-up connections-were rendered useless. Because of this, merchants, restaurants, motels, grocery stores, pharmacies began requiring cold hard cash.

“This even became a problem for people who had money in accounts, and many more, including refugees who were being issued paper checks.

“DOW Louisiana FCU was becoming desperately short on cash. They wanted to stay open throughout the Labor Day weekend, but repeated calls for cash deliveries never arrived and none were expected until this coming Wednesday. Local banks started shutting down early Friday as they ran out of cash.

“Jeff Hendrickson, DOW Louisiana FCU’s chief executive, was determined to stay in service. Jeff called us at 1:56 p.m. on Friday asking us to sell them desperately needed cash. Jeff said that without more cash, people coming to his credit union would not be able to get food, shelter, clothing, and medicine. Jeff said he would do whatever it took-even drive to Lake Jackson if we could find cash for him. He said that $500,000 to $600,000 would hold them until cash shipments arrived on Tuesday.

“I marshaled our senior staff and within 15 minutes had a full count of cash on hand from all branches. Lance Wortham, our commercial vice presidents, called his contact at 1st National Bank and got a commitment of $200,000 if we needed more.

“Less than 25 minutes after Jeff had called we were able to call him back with a commitment to deliver $600,000 in cash immediately. My thanks to Steph, Vickey and Kay for their help.

“The problem was going to be the delivery.

“First, we could tell from their voices that they were bone tired and in no shape to drive anywhere. Our driving the cash to Baton Rouge was going to be problematic because Janice Arizmendi, our chief of staff, had contacted the Texas DPS and had been told that individual relief efforts were being turned away at the state border. Without special permission we would be turned back and never get the cash to the credit union.

“That left one viable solution: fly the cash to them.

“I made the decision that I would fly my plane to Baton Rouge that afternoon. Lance Wortham would go with me.

“The flight to Baton Rouge took about two hours. When the FAA Houston Control Center handed us off to Baton Rough Approach Control we immediately heard the frenzied air traffic control communications.

“We came to find out that the Baton Rouge airport had become the staging area for all aviation rescue and relief efforts. This was the major staging and refueling point for all of the helicopters you have seen on TV and all of the large supply aircraft. In addition, the airport was the staging area for relief supplies coming in and for flying out refugees who were arriving on buses. We actually saw refugees being off-loaded from buses onto aircraft.

“As we approached the Baton Rouge airport our air traffic controllers told us to expect ‘extended vectors for sequencing.’ I knew we were in for some delays getting in. The controllers eventually brought us in, but only after about 45 minutes of practicing 360 degree holding turns. (Lance was very impressed!!)

“Until the day I die I will never forget the words of the Baton Rouge tower controller: ‘November-Eight-Four-Three-Five Foxtrot (N8435F), you are cleared to land Runway Four-Right (4R), straight in approach… and Three Five Foxtrot, I need you to go as fast as you can!'”

“We touched done about 8:00 p.m.; six hours after the initial call.

“We were met by the CEO Jeff Hendrickson, his chief operating officer, Todd Zirkle, and armed security from the local sheriff’s department who came out to the plane to meet us.

“We ‘convoyed’ the $600,000 to the DOW Louisiana FCU main branch where the vault staff was waiting to take the cash. In one of the attached pictures one can see that the clock in the vault reads about 8:30 p.m. Six and a half hours start to finish.

“We exchanged the cash for a check, had a quick meal and were escorted back to the airport.

“Lance and I touched down back in Lake Jackson about 1:45 a.m., tired but exhilarated. [We treated ourselves to some comfort food at IHOP!]

“If there is a hero here it has to be Jeff Hendrickson, chief executive of DOW Louisiana FCU. He was determined that his credit union would not, under any circumstances, fail people in need. And, in a way that really humbled me. Jeff said: ‘I knew if I called upon another credit union, if I relied on our Movement, I knew someone would come through for us. I just knew it. This is who we are. This is what we do.'”

“When faced with that type of leadership, determination and faith, I knew we here at TDECU had to deliver for him. Our TDECU team came through and my airplane performed well.

“It all came together.” 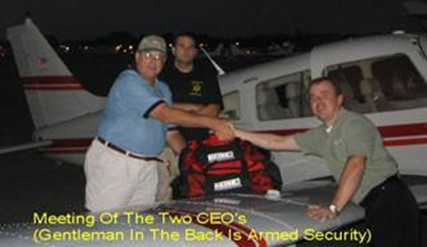 A Charismatic CUNA President and His Airplane

Herb Wegner was CUNA President/CEO 1971-1979. He was responsible for helping credit unions develop many services currently taken for granted today, as well as traditional trade association activities. Among the national programs that started during Wegner’s tenure were:

Wegner was elected Vice Chair of the Commission on Electronic Funds Transfer (EFT) in 1975, raising the visibility of credit unions as important players in modern technology programs for the first time in history.

Here is what Paul Thompson said about Herb in his book, Development of the Modern U.S. Credit Union Movement: 1970-2010:

Wegner reorganized CUNA, and under his guidance it added services to assist credit unions through an increasingly turbulent time. It was an interesting period to be in credit union work, not only because of the fast-changing financial landscape but because credit unionists still saw themselves as a world-changing force.

As Wegner put it: “The exciting thing is not financial, it’s social – the phenomenon of a people’s organization. This is a delightful place to be in an increasingly monolithic world.”

On the way home from attending Herb’s funeral in Washington D.C. in 1987, Chuck Siebold, Tony Schumacher and Brad Murphy brainstormed how to keep Herb’s memory and accomplishments alive. They suggested an award be granted annually in his name by the fledgling CUNA Foundation. The foundation agreed. The Herb Wegner awards became the centerpiece of the Foundation’s formal gala at each year’s CUNA GAC.

How Herb Lost His Job

A former league President describers Herb Wegner as special. “What he did for us is amazing. An example is when we all feared the emerging cashless checkless society, the US Congress put together a commission to study electronic payments. We were all afraid that credit unions would be frozen out by bank influence. George Mitchell, Vice Chairman of the Federal Reserve Board, was appointed to head the Commission. Herb listened to our fears, flew to Washington DC to meet with George Mitchell, and emerged as Vice Chairman of the commission!”

He describes the CUNA Board meeting in which Wegner lost his job:

“Herb did bring a style that some questioned. Jeans and open collared shirt a lot on the job. He wanted a fireplace in his office when they were building the complex that is now CUNA and Cuna Mutual headquarters in Madison. (The board said NO.) He hired a few Peace Corps individuals who some thought should be people with credit union backgrounds. So there was a small cadre who did not understand what all he brought to the table.

Fred Krause was Treasurer of CUNA. He surprised all (or at least most) of us at a board meeting when he gave his Treasurer’s Report and concluded by saying he was tired of fighting Herb about airplane expenses. He then made a motion to fire Herb. John Adams seconded it. Everyone was stunned, but no one fought back. The vote passed. Herb was in disbelief!

Herb was a fabulous leader, well liked, and immensely respected. Most of us thought the CUNA board was short sighted and made a big mistake.”