During the 2020 virtual exam and work-from-home administration, NCUA reduced its total NCUSIF and Operating expenses by over $64 million. This result certainly deserves a shout out to the NCUA board which oversaw this.

The million dollar question is whether these efficiencies and exam oversight improvements will be sustained? Or might the instinct to make up for “lost expenditures” take over?

The agency’s operating expenses, after OTR transfer, fell by $3.2 million from 2019. However, the $116.3 million total was still $40.6 million, or 54% higher, from five years earlier. At least for one year this inexorable upward trend was reversed.

The greater savings were in the NCUSIF. Administrative expenses fell by over $10 million to $181 million which is the lowest level since 2014.

The largest amount was in the net cash losses (payments less recoveries) for credit union failures. Net cash losses are a more accurate reflection of real performance as the provision expense has shown little or no correlation to actual losses for the past 13 years. 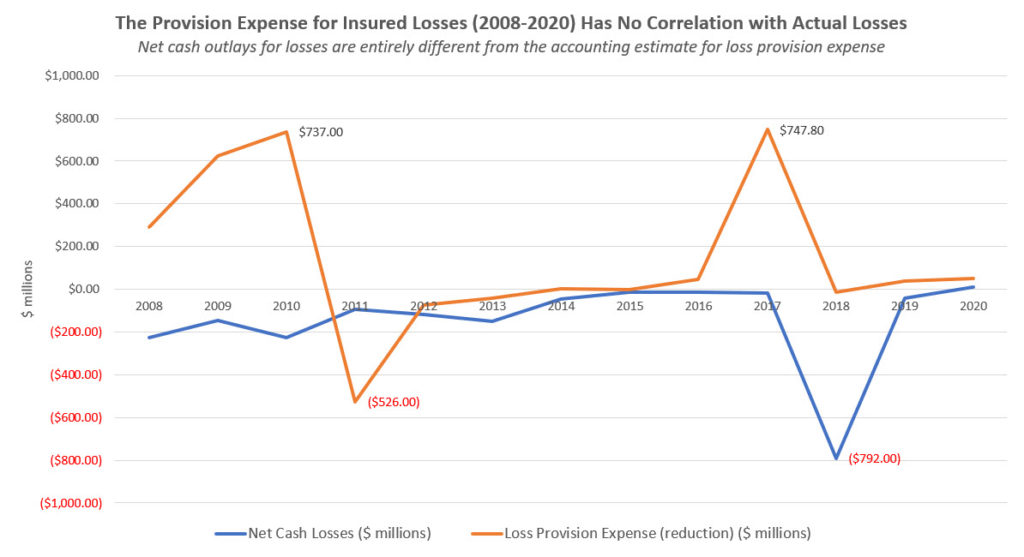 In 2019 the NCUSIF reported net cash losses of $41 million. In 2020 there was a net recovery of $10 million, the first time this has occurred in the past 13 years. This positive recovery was in a year of the worst economic downturn since the Great Recession.

These NCUSIF savings due to a $51 million loss turnaround, plus $10 million in administrative expense reduction added to the $3 million in lower operating costs, together total $64 million.

These numbers are a tribute to credit union resilience and the ability of all segments of the cooperative system to pivot to virtual management. The critical test is whether these virtual gains can be incorporated as ongoing activities so they are maintained when the COVID adjustments are over. Doing so would mean lessons learned that can bring benefits for years to come, even from a crisis. $64 million is a solid achievement not to be lost.