Chip Filson and I were friends until recently, but things have changed.

Calling him a modern day Don Quixote, for his relentlessly obscure attacks on the NCUA sparked the breach. Seeking to upend the “giants” of NCUA with logic, facts, and reason once is certainly an act of fantasy, persisting is delusional. I speak from experience, if you get my tilt.

Entrenched, NCUA trifles and traffics in bureaucratic unaccountability. Those Duke Street windmills remain churned by the oft-feckless winds of politics – and their own internal, hot air. 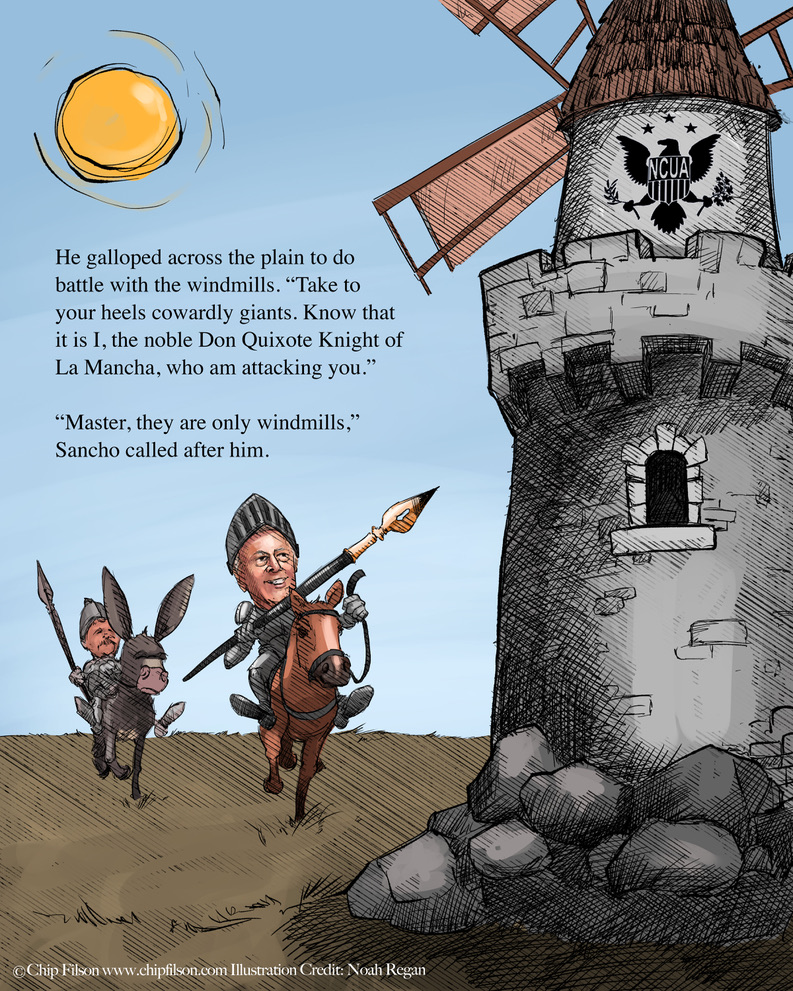 Mr. Filson aside, it is unsettling to find a Republican-majority, NCUA Board perpetuating – and even encouraging – the legendary, “we-know-better-than-you” bureaucratic insolence of the Agency.

Republicans, one thought, were the Party of less government, not more; of more accountability to the people, not less.

Republicans, one thought, were “Bill of Rights”-type folks, who believed that the Federal government should be less intrusive in our lives, not more.

Republicans, one thought, would easily spot that NCUA, an “independent” (answerable-to-no-one) Federal agency, is – more or less – a small “d”, democratic mess!

Responsible Republicans should actually stand for something, not just “go along” with the “dINO-mite” (democratic-In-Name-Only)  “Agenda of the Chair” (Mr. AOC!).

Whether RINO-1 (Republican In Name Only] or RINO-2 (Regulator In Name Only), something isn’t “right” with Mr. Hood nor Mr. Hauptman. Surely when “the base” realizes the problem, Mr. Hood won’t be dining again at Mar-a-Lago and will soon have more free time to enjoy opera.

As for Mr. Hauptman, hard to believe that his political sponsor – an Arkansas Senator – would “Cotton” to learning that his protégé has gulped down the in-house, let-them-eat-cake Kool-Aid and swerved off the right road into a ditch on the left.

Oh, by the way, wonder if Chip Filson remains a life-long “RR”?

Is that why he continues to tilt so earnestly…