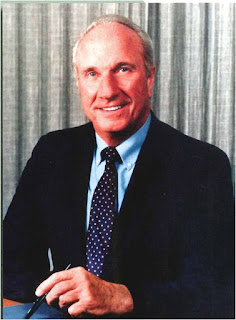 Always suspected that the problem with Ed Callahan was that as a youth he was beaten too often by Nuns in parochial school or, perhaps, not beaten enough. Well, whatever, either way the Nuns left their mark – an indomitable spirit!

Ed Callahan was Irish – brash, pugnacious, loud, hard drinking, fun loving – alive! But why be redundant? I said he was Irish!

For over a quarter of a century, we all watched and observed as Ed Callahan created shock waves in the credit union world. No one was neutral about Ed Callahan. His friends were fiercely loyal, his enemies equally committed. Ed inspired many and angered quite a few. Ed had style; he had presence. With Ed, you weren’t allowed to make contact without becoming involved, excited, immersed, engaged.

At Marquette, Ed must have played football in the same way he played life – without a helmet. You had no doubt that Ed Callahan always played for keeps. He had no intentions of losing, that was not one of the options. Ed was very straight-forward; your choices were always clear. The mission was defined; and, there was only one direct path to the goal. That path was either with you, around you, over you, under you, or through you; you could step aside or get on board. It was your choice; but your choice never changed the mission, nor the path, nor the goal.

Some said that Ed was a visionary…

… they were wrong. Ed Callahan was a revolutionary. Visionaries talk about change, revolutionaries take you there. Ed led from the front – a leader of conviction, rather than convenience; principles above posture – courageous. Revolutionaries, by definition, create problems; overturn applecarts; rebuke the status quo. That happened at NCUA. Appointed by President Reagan, Ed arrived at NCUA in the midst of turmoil. Ed defined the mission; he reformed and remolded the Agency. He taught a regulatory agency how to stop working to prevent the last crisis. He explained that a coach never executes a play and that on Monday morning it’s never hard to see what went wrong – but it is rarely relevant. Teacher, coach, lessons in life; hopefully well learned, hopefully still remembered.

But let me celebrate the essence of the man – that indomitable spirit – one last time, for those who never had the opportunity; for those who still have doubts; for those who never fully understood. One of Ed’s harshest critics, noted with much wryness, that even in death Ed “couldn’t get it right”. Why, I asked? “Because Callahan died on March 18th instead of on the 17th, his beloved St. Patrick’s Day.” You know this type of critic – cynical, smug, self-assured without much basis, not really worth the effort, but…

Just for the record, I would simply like to point out one final time that – first and foremost – Ed Callahan was a fully-fledged, fully-flagrant Irishman – body and soul! And, no self-respecting Irishman would ever celebrate the end of St. Patrick’s Day until the last bell at the pub had rung. That would have meant that Ed Callahan’s “last call” would have come sometime after 4:00 am – on the morning of the 18th. Style, presence, courage – true to the last! A shamrock of joyful vigor and purpose!

And, Ed Callahan will be missed…

One Reply to “Ed Callahan… A Look Back”