(Editor’s note:  The following remembrance of Ralph’s leadership at CUNA was contributed by several of his colleagues.  CUNA’s announcement on September 14 of his passing  can be read here.) 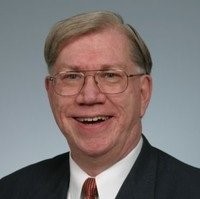 A uniquely talented executive, Ralph successfully led the Credit Union National Association (CUNA) during a critical period of credit union modernization in the 1980s and 1990s. Modernization required transforming the movement’s structure that had remained unchanged since passage of the Federal Credit Union Act in 1934 and soon thereafter, the creation of CUNA. Modernization ensured credit unions’ viability into the twenty-first century by enhancing their capabilities to compete in a deregulated market. It is this historical transition that best captures Ralph’s contributions.

His credit union work began when he joined the Credit Union National Association (CUNA) in 1974 just as the movement recognized the need to change. It lasted through his untimely death while working on behalf of Irish and British credit unions through the nascent Centre of Community Finances Europe that he cofounded.

He initially served as CUNA’s general counsel and then as CUNA’s CEO from 1987 to 1995. He had an innate set of skills that included the foresight to anticipate new challenges before they appeared and overcome the unexpected but inevitable obstacles every endeavor confronts.

By any measurement of the qualities necessary to be a leader, Ralph met them all. He possessed vision, steadfastness, empathy, resilience, and compassion. Those traits – blended by his splendid intellect and indefatigable personal energy – defined Ralph as an unusually gifted executive.

The Forces for Credit Union Modernization

Ralph was at the center of the credit union movement from the early 70s on. The number of credit unions reached a high near 23,000 in 1972. However many credit unions lacked a too narrow a base from which to grow. Chartering new credit unions became challenging.

CUNA embraced the new regulatory era initiated by the National Credit Union Administration that allowed credit unions to accept small employee groups in their membership so long as each group had a common bond.

Ralph’s leadership during this transformative period is incalculable. Playing an instrumental role in ensuring credit unions had the tools to compete and thrive, Ralph advocated changes to the structure of the credit union system that served the movement since the 1930s.

Among the reforms led by Ralph was the creation of new movement entities that enhanced the competitive capabilities of credit unions by leveraging their ability to collaborate.  It required a transformation of CUNA’s Governance structure. Formed initially as an association of state associations, CUNA’s Governance needed to blend the role of both credit unions and their state leagues.

CUNA Service Group, a CUNA and league subsidiary, was created to enable credit unions to become full-service financial institutions. Through partnerships with reputable financial-service companies, credit unions were able offer a range of new services beginning with a form of checking called share drafts that new legislation had enabled. As an attorney, Ralph played a prominent role in creating the share draft program from its successful pilot to the national rollout.

Ralph helped create U.S. Central Credit Union that functioned as a corporate credit union for natural-person credit unions.  It then evolved to become an integral part of a new Corporate Credit Union Network providing a full menu of wholesale services to credit unions.

Under Ralph’s leadership, the CUNA Foundation progressed from supporting credit unions  responding to environmental disasters into the influential National Credit Union Foundation. In addition to CUNA’s president and CEO, Ralph was president for each of these organizations.

While modernization reduced the number of credit unions, the number of members and assets grew exponentially.  Their growing operational independence created different relationships between credit unions and their associations. The CEOs of large credit unions sought greater direct input into their national organization.

Under the movement’s original structure, credit unions belonged to the state leagues and the leagues belonged to CUNA. Ralph initiated the first steps of revamping this ownership structure. He created a task force of credit union and league executives which proposed recommendations that led to a significant changes and new association bylaws.

Called “Renewal,” the process provided a combination of credit union and state league representatives on CUNA’s governing Board. For the first time credit unions became members of CUNA. Elections to the board were regionally based.   Divisions representing credit unions of differing asset sizes ensured fair representation among an increasingly diverse movement, while still including a membership category for leagues.

Modernization and the growth of large credit unions required more sophisticated educational and training services for the growing numbers of professionals joining the industry. Credit Union marketers approached Ralph to propose the creation of a Marketing Council run by the marketers themselves with CUNA providing support services. This first council led to more organized around the professionals now employed in credit unions—finance, lending, technology, human resources and operations. The councils now have a multi-decade record of sharing their knowledge among over 6,000 members.

Regulatory modernization, credit union growth, and the rise of professional staff led to concerns that the movement would lose touch with the cooperative philosophy of its roots.  In response Ralph supported a program called Development Educators so credit union personnel could be ambassadors to explain the cooperative tradition of service over profit and the importance of credit union’s historical role.

Leading In an Era of Change

Ralph’s tenure during this era of multiple modernization forces was in many ways equal in importance with the founding years credit union development. Ralph’s leadership role was as vital to credit unions today as those achieved by the movement’s founders.

Leaders earn respect by combining a commitment to the execution of strategy with sensitivity for the people with whom they work.  Ralph understood that compassion does not dilute a leader’s strength. It complements it. Humility is not a weakness, but it is a sign of confidence. All leaders make unavoidable difficult decisions.  Ralph made many, but he never lost sight of such decisions on people.

His recent death in Dublin, Ireland while continuing his credit union work with Irish and British credit unions was stunning. It is difficult to conceive the loss of such a vibrant individual who played an instrumental role in credit union modernization. To those who worked with him through his long commitment to the mission of credit unions, he will always be remembered with great fondness and deep respect as an exceptional person and an astoundingly skilled leader.

These personal attributes made him a leader who earned the admiration and respect of credit unions worldwide. He will be missed.