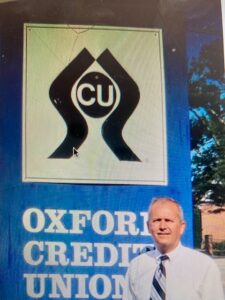 Mike Dickerson recently retired, after 41 years, as the CEO of Oxford Credit Union. Under Mike’s leadership, the Credit Union has grown year over year – every year for 40 years! During Mike’s tenure the Credit Union increased in assets ten-fold to over $20 million; but funny, no member ever asked Mike “how big” the CU was. Oxford Credit Union was not about size; it was far more valuable than that. Oxford CU focused on service.  Mike Dickerson was one of the finest leaders in our community. In case you didn’t know that, I wanted to let you know why.

Folks usually have an opinion about CEOs – mostly not that favorable. CEO-types often appear a bit too self-important, are not known for humility, and seem to have spent way too much time in front of a mirror. Mike Dickerson was not that kind of leader. He thought common sense was better than an executive coach; he never tried to buy a bank; and he didn’t need a corporate jet to prove he was a leader – because he was the real thing. Mike never took himself too seriously as a CEO, but he was deadly serious about his responsibility to serve the best interests of his members, his staff, and his community. As with all strong leaders, Mike was also called upon to lead in his church, in our electric co-op, and in business and civic organizations.  Mike Dickerson believed life was about serving others. He spent a lifetime doing just that. It was as simple as that.

As leader of the Oxford Credit Union, Mike Dickerson worked hard to help local folks succeed – staff and members alike. He felt that every position at the Credit Union was important; he pushed his staff to discover who they were; he expected everyone to lead. Mike knew that fine folks come from all backgrounds and in all shapes, sizes and colors. The package really didn’t matter; it was what was inside your heart that counted. People knew Mike cared about them. And best of all, he would listen to them! It was as simple as that.

Small, community-focused credit unions are home grown financial cooperatives – owned by the members who use their services. Access to credit is important to most folks in a small town, because “making ends meet” can be a struggle, there is never enough money to go around, and rich uncles are few and far between. As opposed to other financial institutions, credit unions operate on a non-profit basis and try hard to find ways to leave money in local folks’ pockets. Oxford Credit Union did just that; it practiced what it preached. So did Mike Dickerson – “frugal” was Mike’s middle name. Mike Dickerson took good care of “his stuff” – who else waxes their lawnmower? – and took even better care of his members.  Great leaders always seem to “take it personally”. It was as simple as that.

Mike Dickerson has spent his entire life in Granville County, N.C. and knew his members well. They were his friends, his neighbors, his family. In fact, Mike Dickerson was kin to over a third of his members, over half of them if you counted “by marriage”  – and all of them if you counted their second marriages! That’s the way it is in a small town.  Mike well-understood that when applying for a loan some folks “don’t always look good on paper”, because life can be messy, people make mistakes, things sometimes get out of control. Mike knew how to say “No”, but always sought for a way to say, “Yes”. In lending, “They’ve always done right by us “, was better than a credit score and character was more important than collateral. Mike Dickerson always kept his promises and he expected you to keep yours. If you broke your promise, there were consequences. When funds were short, folks always paid “Mr. Mike”. It was as simple as that.

Mike Dickerson was committed to the folks in our community for over 40 years and worked hard to make our lives better. Mike Dickerson went about his work in a quiet, humble manner. He was faithful in his stewardship as a leader. Mike Dickerson charted a sound path for the Oxford Credit Union; he never lost his way.He probably thought we didn’t notice, – but we did.  Mike Dickerson trusted his members and we trusted him. It was as simple as that.

Credit unions: It should be as simple as that.