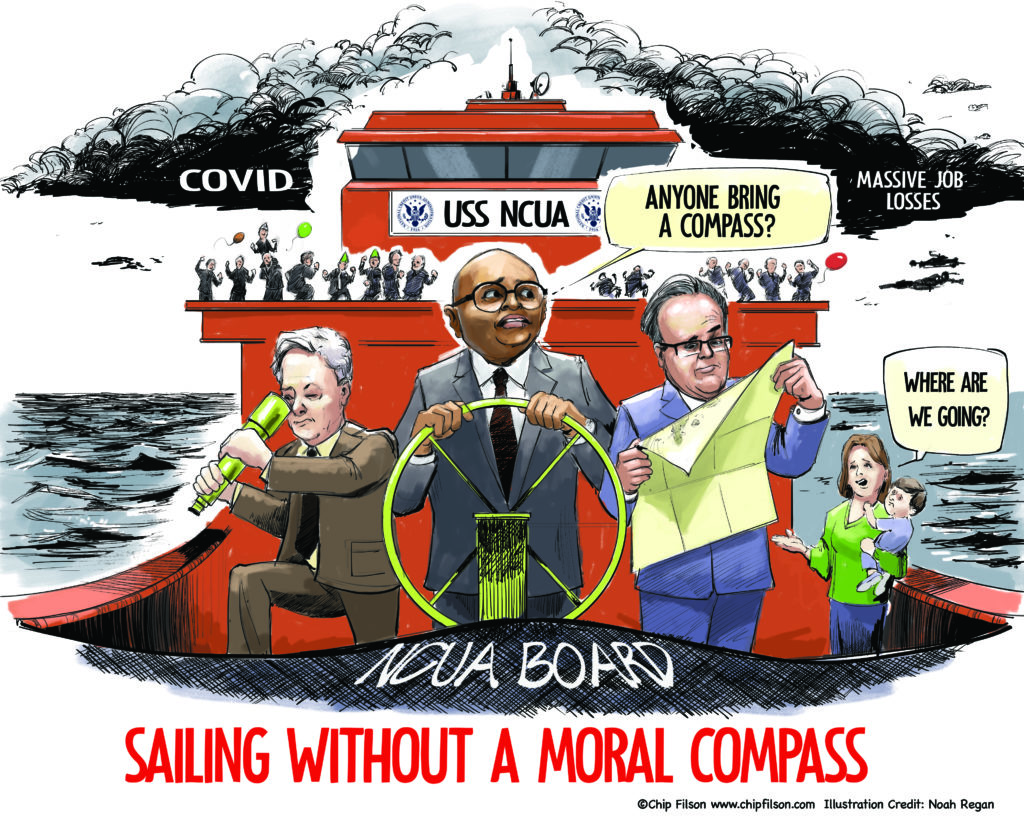 What does it say about a federal government agency whose leadership collectively confesses to the inability to tell right from wrong, legal from illegal, good behavior from disreputable? Especially in the middle of a national crisis.

That was the stunning admission revealed by the NCUA last week as it announced a new personnel decision made at its March 19 closed board meeting.

On April 22, NCUA announced the Board’s decision to hire a “chief ethics counsel.” Supervised by the chairman, the press release stated: “The Office of Ethics Counsel will certify the agency’s compliance with relevant federal ethics laws and regulations, promote accountability and ethical conduct, and help ensure the success of the NCUA’s ethics programs.” This had been a role of the General Counsel.

Senior federal executive appointments are traditionally selected based on candidates’ experience, convictions and proven character. Ethical obligations and moral behavior are presumed. This Presidentially appointed, Senate-confirmed NCUA board trio has now conceded the Agency is failing in this basic discernment ability.

So, in addition to three board members, their personal policy advisors, senior staff including an executive director and deputy, a general counsel and deputy, and the full organizational capabilities of human resources department, the agency is unable to make ethical decisions.

It makes the story of the Greek philosopher and cynic Diogenes’ quest for an honest and truthful person more than prophetic.

The litany of disastrous and self-serving actions by senior agency personnel in just the past three years is lengthy.

Compounding Error with Folly: A Self Promotion Campaign Paused

As if this admission of collective moral bankruptcy was not itself damning, the agency on April 24 further proved its leadership vacuum.

On that day the credit union press reported NCUA’s contracts with three public relation firms’ for more than $500,000 to assess, compare and then rebrand the agency signage and logo. Deliverables also included responding to agency media requests and preparing testimony.

When the December 2019 contracts became public on April 24 through FOIA requests, the agency immediately said it would postpone, not cancel, the contracts.

The agency’s operational hold of this four-month effort was explained by the need “to spend more time addressing the coronavirus crisis.” This covering story fabrication is underscored by the fact that the President declared the coronavirus national emergency six weeks earlier on March 13.

Serving Members: We’re In This Alone

In this crisis, the lesson for credit unions serving members tirelessly under the slogan “We’re in this together,” is that they are also in this alone.

The most important authority of any government leader is moral, not rules and regs. Without this “compass,” the regulatory instruments and collaborative resources at NCUA will not be directed to enhance credit unions’ fundamental values or purpose.

Instead, NCUA’s pattern of actions betray the basic values that make credit unions different. Cooperative success relies on self-help, mutuality, burden sharing and community well-being. These values, more than unique processes and services, make credit unions who they are.

Daily, credit unions are carrying out this cooperative philosophy and their “essential service” designation for millions of members—many laid off, most uncertain about their future, and everyone anxious for their personal safety.

The good news is that we have been here before, and the collective changes undertaken in 1980-1984 for example, served a whole generation that followed. How will this generation of credit union leaders fulfill its destiny?