Field of membership (FOM )has been a legal characteristic of credit unions from the first charters.

Virtually all credit unions in operation today were started with no financial capital  The “common bond” of association, employment or community provided vital support along with organizers’ sweat equity to provide the critical “capital” to get the effort started.

As financial reserves were built over generations, credit unions grew increasingly independent of sponsor support.  In the case of many employer based credit unions, the FOM became a vulnerability. Especially when a company failed, moved away or laid off employees.

An example is the International Harvester sponsored coops.  At one time almost 20 credit unions served its factories, Chicago offices and subsidiaries such as the Wisconsin Steel Plant.  Today none of those businesses exist.

The FOM has come to be viewed by many as a constraint on credit union expansion.  Even with the multiple interpretations now possible by state and federal regulators.

The debate continues and practices evolve. FOM’s vary greatly from the very limited charter of State Farm FCU to the “anybody can join” definition of PenFed. Its reported FOM is 330 million potential members!

Is the FOM, which is  a legal requirement even if loosely interpreted, a strength or a constraint?

Below is  a traditional view.  This is an excerpt from John Tippet’s presentation on American Airlines FCU’s strategy to Navy FCU’s board in 2001.  John was CEO at the time and has since retired.*

Here is his opening comment focusing on the common bond:

Thank you for the opportunity to speak – this assignment has given me the challenge to organize my thoughts and better comprehend how membership common bonds have contributed to the success of credit unions, and to realize what the benefits of that principle are to us now and will be to who we are and what we do in the future.

A couple of years ago, the Credit Union National Association (CUNA) encouraged credit unions to participate in their “Project Differentiation.”  They asked us to prepare statements and other forms of documentation about what it is that we as credit unions do and why we are different than banks or other financial services providers.

We were then encouraged to share those materials with our members, Congressional representatives, and in other public forums.  In doing ours for American Airlines Federal Credit Union (AAFCU), we labeled it “Who We Are and What We Do.”

Who we are is the common bond shared by those described in our field of membership – employees, former employees, retirees, spouses, and children of those associated with American Airlines and the related companies originally created by American Airlines.

We’re very proud of our common bond and we’re grateful for the part it has played in defining who we are.

It is my conviction that common bond is a credit union’s strategic advantage.  Common bond  helps make us different, contributes to our operational efficiencies, helps make our branding effective, and is a catalyst to increased focus on who we are and what we do. 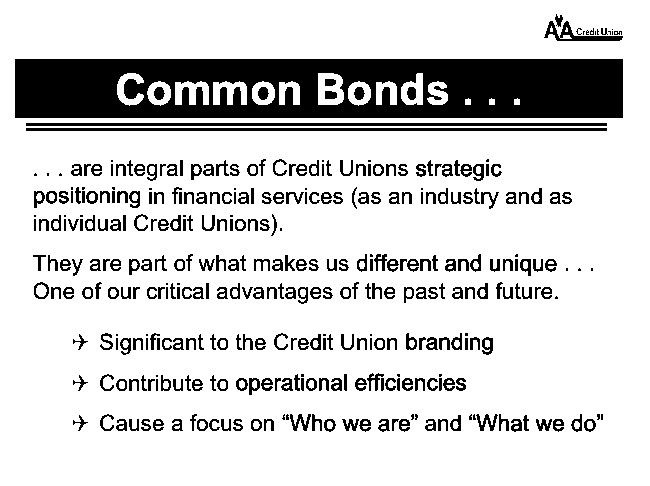 In fact, part of the 1925 Edward Filene quote in your advance reading materials reads, “Whatever the common bond uniting the members, the bond must exist.”

Mr. Filene understood the value of common bonds.  In those formative years of U.S. credit unions, they were already learning from their past and the, then current, real world of financial institutions.  Mr. Filene had seen the banking panics and failures of 1895 and 1907.  He also had seen credit union models working in other countries, so he learned from them both.

By trial and error, the current U.S. banking system has emerged, including regulatory structure, the role of federal insurance, and a new tradition of credit unions within that system.

We are a product of an evolutionary process, having survived as a result of unique adaptations and specialized advantages, one of which has been the common bond – the shared interests and affinities of credit union members.  (end of excerpt)

This statement is only 5% of his strategic presentation.  The entire talk contains an additional twenty slides.  He covers branding, products and the credit union’s response to 9/11– offering to help finance a plane for the sponsor.

Tomorrow I will offer another perspective from Ed Callahan.  As NCUA Chairman (1981-1985) he played a critical role in enlarging the interpretation of the FCU Act’s requirements.  A decade later one aspect was taken to the Supreme Court by bankers where the multiple group policy was overturned in a 5 to 4 decision in 1998.

What was Ed’s underlying philosophy? How did he reference credit union history in his understanding?

John worked for 25 years in the ‘for-profit’ world (American Airlines) before becoming the AAFCU CEO.  He was an Officer with Sky Chefs, an AA, Airport Restaurant and Concessions, and Airline Catering, subsidiary.

The one material change after this talk was to take advantage of the TIP (trade, industry, profession) FOM option. This allowed other employer’s co-workers at the Airports to become members.  Airports were the credit union’s “community.”

One Reply to “Field of Membership: How Important Is It ?”