The following are excerpts from two CEO November  reports to their employees with examples of  credit unions acting . . . like credit unions.

From Day Air:  Heidi and the Accounting area started with 95 dormant accounts with balances totaling $279,000 and worked those numbers down significantly to keep member money from being turned over to the State of Ohio in compliance with escheatment laws.  Most of those members were located so balances of only $26,000 from 35 accounts are being remitted to the State.

We had a deceased account that was up for escheatment, and I noticed that there was a beneficiary, Nick, listed but that we had never heard from him.

I asked Paula about this and all we had was return mail for this person. I noticed an old cell phone listed on the card and suggested we call as most people don’t usually change a cell number, even if moving out of state.

Paula called, left a message, and the beneficiary returned her call the same day. He was still in the same apartment building in New York but had changed apartments.

After confirming we had the man we were looking for, Nick began to tell Paula that he had been adopted and never really accepted by his extended family (cousins, aunts, uncles) but did have one aunt and uncle that were always very kind to him.

Long story short, Nick will now be receiving just over $436,000 that he was not expecting.

Most of time when we escheat there is not much money but when I saw this account with $436k, I could not see letting this go so easily.

To me, $436,000 is life changing money and so happy that this money will be paid out as our deceased member had wished.

One of our primary value propositions is that we’re local.  We’re Dayton area people helping our friends and neighbors in the Miami Valley with their finances.  It’s easy for people to be attracted to fintechs and Internet banks, but when you have a problem being local can be all the difference.

I just heard a story of someone who was using Chime, had a problem and couldn’t get the issue resolved.  Of course, Chime doesn’t have any local offices – just a website and an 800 number.

Here at Day Air, we’re human and so make mistakes.  The difference is that we’re local, we’re here to help our friends and neighbors, we’ll address the situation and make it right.

We hit another milestone in November as the credit union has now contributed $125,000 to the Community Impact Fund to support our zero-interest loan program for members of Team WEOKIE who have found themselves in financially stressed positions.

We have granted $89,161in loans with $43,576 having been already repaid and making these funds available to be re-loaned to other team members who find themselves in financial difficulty.

A chart showed how the $89,000 in loans has helped employees. 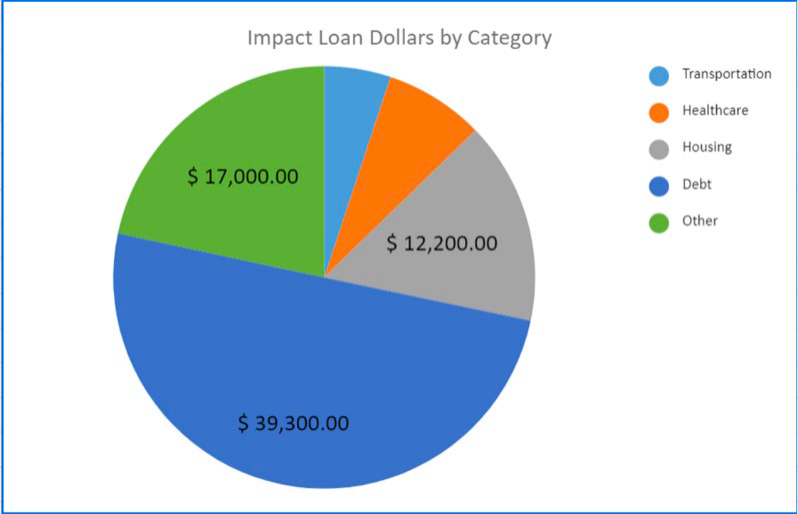