From Lincoln’s address Before the Young Men’s Lyceum, Springfield, January 27, 1838

On November 7, 1837, Elijah Parish Lovejoy, a Presbyterian minister, journalist, newspaper editor, and abolitionist, was killed by a pro-slavery mob while defending the site of his anti-slavery newspaper the St Louis Observer.  Lincoln was deeply concerned by the event and the lynching of a freedman in 1836.  This speech was from the time he served in the Illinois state legislature in Springfield ( 1834-1842 )where he shaped his skill as a public debater.

The Lyceum  talk was titled:  “The Perpetuation of Our Political Institutions”.[1][2] In this speech, Lincoln warned that mobs or people who disrespected U.S. laws and courts could destroy the United States. He went on to say the Constitution and rule of law in the United States are “the political religion of our nation.”

How then, shall we perform it?  At what point shall we expect the approach of danger? . . .Shall we expect some transatlantic military giant, to step the Ocean, and crush us at a blow?  Never! All the armies of Europe, Asia and Africa combined, with the treasure of the earth (our own excepted) in their military chest;  with a Bonaparte for commander, could not by force, take a drink from the Ohio, or make a track on the Blue Ridge in a trial of a thousand years.

At what point then is the approach of danger to be expected?  I answer, if it ever reach us, it must spring up amongst us.   It cannot come from abroad.   If destruction be out lot, we must ourselves be its author and finisher.  As a nation of freemen, we must live through all time, or die by suicide. 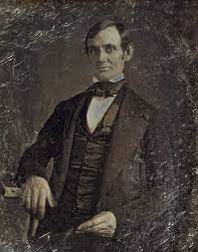 This excerpt is from a lecture by Dr. Ronald C. White (BA, UCLA; PhD Princeton University) an independent scholar and authority on Abraham Lincoln. He is the author of Lincoln in Private: What His Most Personal Reflections Tell Us about Our Greatest President.

His book is based on 111 private notes Lincoln wrote to himself which provide insights  into his personal, religious and  intellectual journey as a politician and statesmen.

Lincoln’s words are timeless, especially as we face  our political divisions today.  They were transformative when first prepared.  They feel even more profound today.