Thomas Paine on The Crisis

THESE are the times that try men’s souls. The summer soldier and the sunshine patriot will, in this crisis, shrink from the service of their country; but he that stands by it now, deserves the love and thanks of man and woman. Tyranny, like hell, is not easily conquered; yet we have this consolation with us, that the harder the conflict, the more glorious the triumph. What we obtain too cheap, we esteem too lightly: it is dearness only that gives every thing its value.

Heaven knows how to put a proper price upon its goods; and it would be strange indeed if so celestial an article as FREEDOM should not be highly rated. Britain, with an army to enforce her tyranny, has declared that she has a right (not only to TAX) but “to BIND us in ALL CASES WHATSOEVER” and if being bound in that manner is not slavery, then is there not such a thing as slavery upon earth. Even the expression is impious; for so unlimited a power can belong only to God. . . .

President Zelensky to the US Congress:

Russia has attacked not just us, not just our land, not just our cities. It went on a brutal offensive against our values, basic human values. It threw tanks and planes against our freedom, against our right to live freely in our own country, choosing our own future, against our desire for happiness, against our national dreams, just like the same dreams you have, you Americans.

Ladies and gentlemen, friends, Americans, in your great history, you have pages that would allow you to understand Ukrainians, understand us now when we need you, right now.

Remember Pearl Harbor, terrible morning of Dec. 7, 1941, when your sky was black from the planes attacking you. Just remember it. Remember September the 11th, a terrible day in 2001 when evil tried to turn your cities, independent territories, in battlefields, when innocent people were attacked, attacked from air, yes. Just like no one else expected it, you could not stop it. . .

Peace in your country doesn’t depend anymore only on you and your people. It depends on those next to you and those who are strong. Strong doesn’t mean big. Strong is brave and ready to fight for the life of his citizens and citizens of the world. For human rights, for freedom, for the right to live decently, and to die when your time comes, and not when it’s wanted by someone else, by your neighbor. 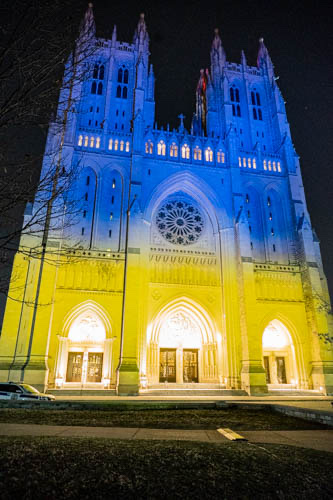