(Source for quotes below: the December 16, 2021 NCUA board video:  https://www.youtube.com/watch?v=zstCJgfdYTM)

In two prior blogs I outlined several problematic aspects of the new CCULR/RBC rules:

Combining RBC/CCULR in one package is the ultimate regulatory hubris.  NCUA’s  new higher capital requirement, was  to mitigate the extraordinary burden of the RBC.  Both remain. As Board member Hood commented:  The RBC rule is so tragic, that yes, it needs an off ramp.

Only a myopic, closed bureaucracy, completely indifferent to its impact on credit unions, could create such a convoluted compliance outcome.

Never in the history of NCUA has so great a regulatory burden been imposed on so many credit union members with such groundless reasoning and data.

The Absence of Substantive Objective Data

When implementing a statutory requirement as NCUA claims to do with these intertwined deformities, the federal administrative procedure process requires there be substantial objective data to support the action.

The legal principle is simple: if the government is going to restrict the choices people are making under their own agency, then the regulation must document the harm either taking place or to be prevented. In this case ,the issue is the credit union system’s safety and soundness.  One board member stated the regulatory requirement in December this way:

Rodney E Hood:  The framing of the issue today is really about capital adequacy and if credit unions have shown through history that they have sufficient capital to serve member-owners while facing various risks.

Have the financial outcomes of credit unions failed to meet NCUA’s safety and soundness standards  prior to this?

NCUA presented neither past failures nor current inadequacy to support these increased capital changes.  Credit unions’ track record since the implementation of PCA in 1998, following the RBNW (risk-based net worth) rule, is one of increasing safety and soundness even during the peak of the Great Recession. 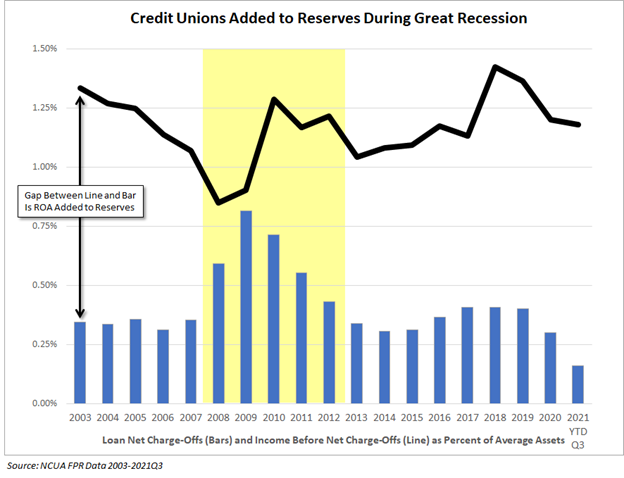 In the traumatic GDP drop during 2020’s first quarter’s national economic shutdown (the largest fall on record) and the subsequent multiple economic uncertainties due to COVID, the NCUSIF recorded zero net cash losses in both 2020 and 2021.

Throughout the last two decades credit unions have maintained a reserve buffer of over 300 basis points above the required well capitalized 7% standard, as pointed out by Vice Chairman Hauptman in his comments about the rule.  The following chart shows the capital levels during these two decades, including the years of the Great Recession. 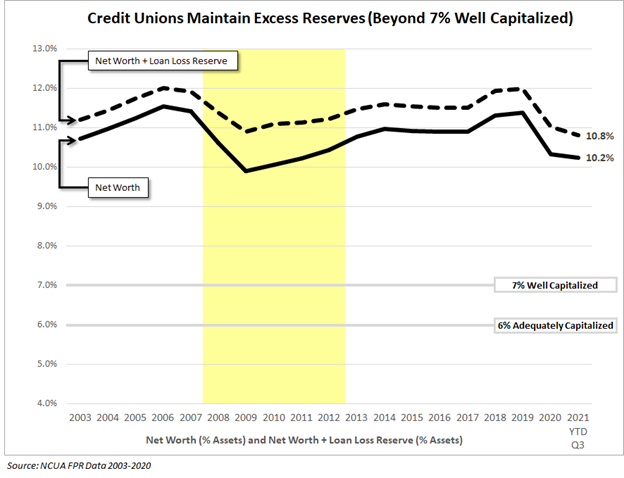 The most critical fact about why the rule is unnecessary was given by staff in response to a question by board member Hood.

Rodney E. Hood: . . . what have been the largest five losses to the Share Insurance Fund over the last ten years, and what were those losses to be specific?

Kathryn Metzker (staff): When reviewing credit union losses of natural person credit unions in the last — I actually looked back about ten years . . .The risk-based capital framework would only apply to one of the (five) failed institutions as mentioned earlier, one credit union over $500 million as the remaining four have assets less than the complexity thresholds.

Earlier in the dialogue, she identified the additional capital requirement shortfall under RBC in this one case as $77 million.

Hood’s other comments on the rules are illuminating and cogent:

After serious study and consideration, my preference is to consider repealing the RBC rule outright and fine tuning our existing risk based net worth rule.

The reality is that RBC should be a tool and not a rule, and if it is effective in identifying risk, then it should be put in the examiner’s toolbox.

But the last thing I think the NCUA should do is impose it on credit unions as an operating model. The juice isn’t worth the squeeze for risk-based capital, because this is a regulatory burden with what I believe is limited benefit.

I think risk is something that you manage each and every day.  It’s not a formula you can run on your balance sheet.

Chairman Harper is the author of this action. He asserts that RBC/CCULR is required under his interpretation of the PCA statute.  To defend his support of a 9% CCULR minimum versus his original 10% proposal, he cites Goldilocks and the Three Bears’ logic.

Harper: Our biggest decision in finalizing this rule was at what level to set the CCULR. In reaching a consensus, we looked at the lessons of the famous children’s story. Some wanted the leverage ratio to be 8%. I view that as too soft. I wanted the final CCULR level to rise over time and reach 10%, a level that others considered too hard, so we compromised and permanently set the CCULR at 9%. That ratio turned out to be just right. While lowering a credit union’s capital risk‑based compliance requirements, CCULR actually increases the system’s capital buffer.

The RBC complex burden was so clear even to NCUA that it proposed the CCULR “off ramp.” The 9% “just right” number was selected because the Board did not want to make it too easy “to move between the two capital options” or what it called “the potential for regulatory arbitrage between the two frameworks.”

From both a macro and a micro data perspective, there are no facts to support raising the credit union system’s capital requirements. The RBNW approach with the long standing 7% minimum required by PCA and has proven sufficient time and again.

The absence of objective data is important for future corrective action.  Once this rule becomes embedded in NCUA and credit union  actions, there could be reluctance to give up this expanded financial comfort cushion, no matter how damaging to members it might be in the meantime.

A Fast-Burning Fuse of 500+ pages of rules

Both in substance and process these rules are an extraordinary and unprecedented immediate regulatory burden.

The rules were approved with a short burning fuse of just 9 days.  If the 10% standard in the proposal had been adopted, it would have been with a two-year phase in.  But 1% lower, no phase-in needed.

There was no recognition that the only source of credit union capital is retained earnings which are only built up over time. There was no crisis or need for immediacy.  RBC was first proposed in 2014, seven years earlier.

RBC/CCULR is a failure of regulatory discretion and judgment.  NCUA’s RBNW rule had been in effect for over 20 years. It embraced limited certainties from observed experience.

The new rules present unlimited certainties about every asset’s potential risk.  These risk weightings are projected into the indefinite and unknowable future.  It did so ignoring all “substantive objective evidence” of the cooperative system’s capital adequacy and sound performance under the existing RBNW.