One commentator on the rule which went into effect on January 1, wrote me:

“Regulatory net worth is a tax on asset growth. It requires resources be directed to reserves held idle on the balance sheet, instead of being used for investment in credit union products and services. . .

Increasing the regulatory capital erodes competitive positioning opportunities and makes it harder for credit unions to fulfill their chartered mission.

The other factor is the low interest rate environment.  You can’t accrete capital fast enough by just growing assets anymore. . .   This regulation is a death warrant for credit unions between $400 million and $1 billion.  . . .”

How much is this initial tax to be CCULR compliant?

Between $30-40 billion  of sequestered existing reserves or required new capital to be at 9%.  That assumes no capital buffer is added.  This total will be approximately double the industry’s total net income in 2021.

Two others wrote after reading Three Strikes a RBC/CCULR Should be Out:

Why didn’t someone sue?

I’m not hearing a peep out of CUNA or NAFCU over this change.

The Grass Roots Effort in 2015

The December 2021 RBC/CCULR rule was the fifth formal rule-making effort spanning an eight-year period.  The initial proposal was so badly put together the agency concluded that: After carefully considering the comments of stakeholders, Chairman Matz in September (2014) announced that the agency would make significant structural changes to the proposal and issue a revised proposed rule for a second comment period.” (NCUA 2014 Annual Report pg 12)

The final rule was proposed in January 2015.  At that year’s GAC convention, credit unions were urged to Raise Their Voice in opposition to the rule.

With a booth encouraging action: 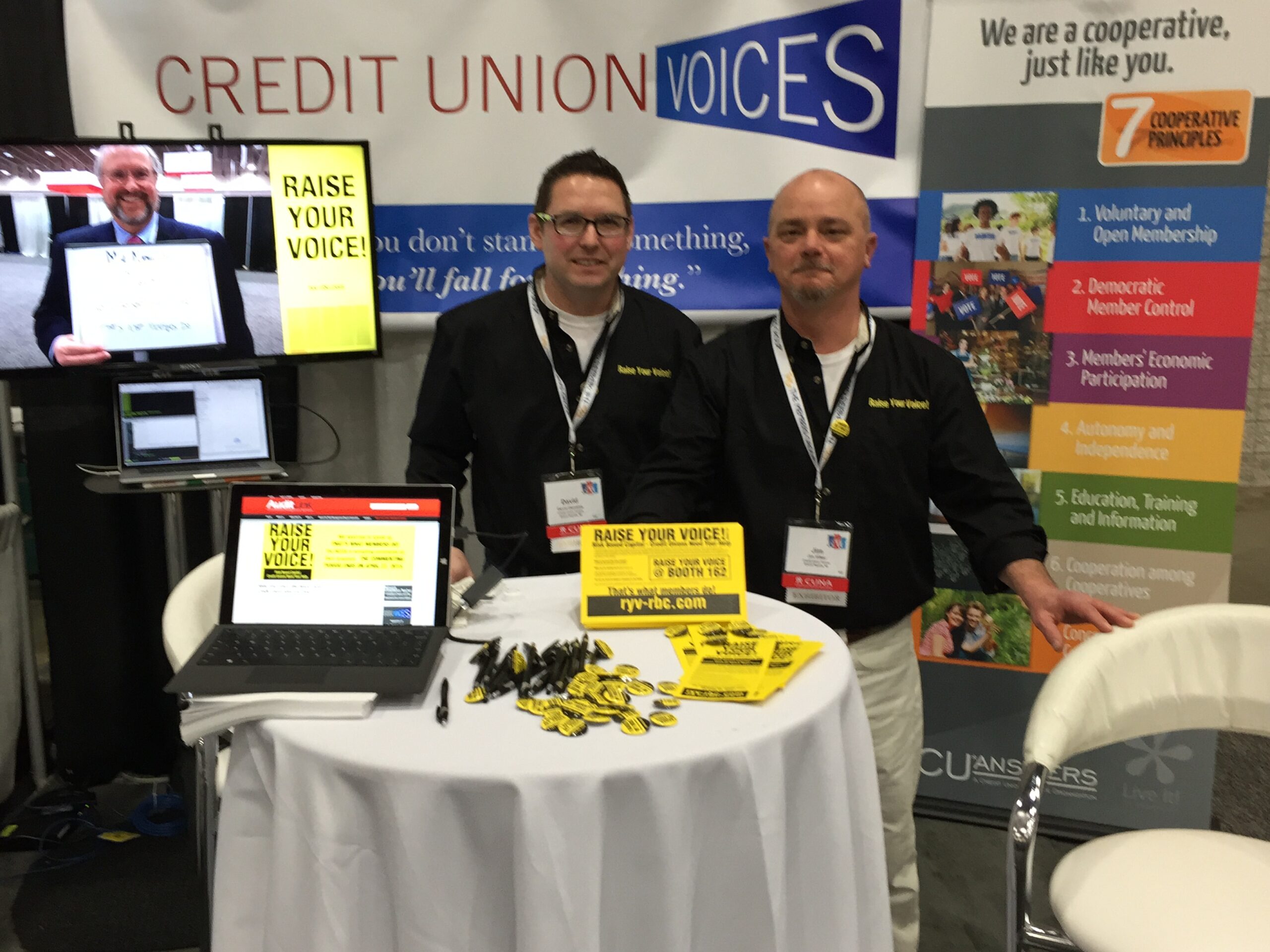 Despite widespread, continued credit union opposition, the Board approved RBC in a 2 to 1 vote  in September 2015 with McWatters opposed.  Ironically, NCUA’s 2015 Annual Report’s theme, “The Year of Regulatory Relief” was a PR fantasy.

So onerous was the rule that implementation was deferred  for more than three years until January 1, 2019 to: “provide ample time for affected credit unions to choose to generate more capital while continuing to maintain their current portfolios, reduce risk, or execute some strategic combination of the two.”

In October, 2018, the Board approved a one year further delay in implementation. It raised the definition of complex in the rule from $100 to $500 million in assets, removing 1,026 credit unions from its requirements.

In 2019 the Board passed another delay of two years until January 1, 2022, described as a “win for credit unions.”

The fifth time was the charm.  By a vote of 3-0 in December, 2021, the board passed RBC and CCULR with only a nine-day lead time before becoming effective on January 1, 2022.

One of the realities of public discourse is that when something is repeated often enough, people begin to think it is true.  Especially if the misstatements are by persons in authority.

Credit unions filed 2,056 comments in opposition to the 2014 proposal. They filed just 21 responses to the new CCULR/RBC rule.

Was the low response due to regulatory fatigue?  Did NCUA just outlast the widespread industry opposition? Perhaps.

I believe the pattern of reissuing, modifications and extensions all created the impression that the rule was both necessary and legal.  It was neither.

It is an example of an “illusory truth effect” created by NCUA’s off and on again eight-year rule making campaign.

Under 22 years of RBNW guidance, the agency summoned credit unions’ self-determined capital management,  The  result was a 3.5% average net worth ratio above the 7% minimum.  RBC/CCULR imposed a new, higher 9% standard by fiat.

Who Will Raise the Issue Now?

Credit unions’ initial response could be to give up any effort to change.  Just attempt to live with it.  Or merge.  The reporting and tracking burden is so intense that NCUA has launched a 90-day period of  industry webinars, examiner training and printed guidance.  It has waived late filing fees for March.

At a time of rising interest rates, inflation, cyber worries, members’ economic uncertainty and continued technology disruption, credit unions are learning to fill out a new form.  Five pages of data to calculate a single ratio.

Once this one ratio result is known, credit unions must then decide how to conform all of their decisions to this rule that rates the risk of every asset choice they make.

This rule was a leadership failure from the top down. To change will require action from the grassroots up.

A rule promulgated  to enhance the future viability of the credit union system will have just the opposite effect.  It reduces competitive options immediately.

Every credit union attending GAC can inform and rally peers, trade spokesmen, congressional contacts and the press about this unwarranted burden.  Examples are critical; do the homework. Know your ratio and the choices you now must make to counter the rhetorical myths others may use to support the rule.

Press your case publicly-see the booth picture above.  Privately, ask NCUA board members to see the consequences and change the rule before more harm is done. Board members Hood and Hauptman stated their responsibility for the rule’s consequences:

Hauptman: The Board intends to monitor the impact of CCULR and RBC on credit unions and the Share Insurance Fund going forward. I look forward to working with my Board members next year and the year after on quantitative analysis on a cost and benefits of our current approach to RBC and CCULR.

Why not begin this year?

One of the unique features of credit unions is their democratic governance. Whether in the oversight of the credit union via the board or in interactions with the regulator, democracy is fragile.  It requires constant practice, renewal and involvement.

This rule is so obviously wrong from  many perspectives that it is hard to understand how it got this far.  But the internal appeal of governmental authority is strong, especially clothed with good intent.

The authority asserted in this rule is total, every asset and maturity decision now comes with a regulators’ risk rating.  NCUA staff and board seem blissfully unaware of how this will impact credit unions.  Somehow it is supposed to make the insurance fund stronger!

Changing this outcome will require an all hands and all voices effort.  But then democracy was never meant to be a spectator sport. 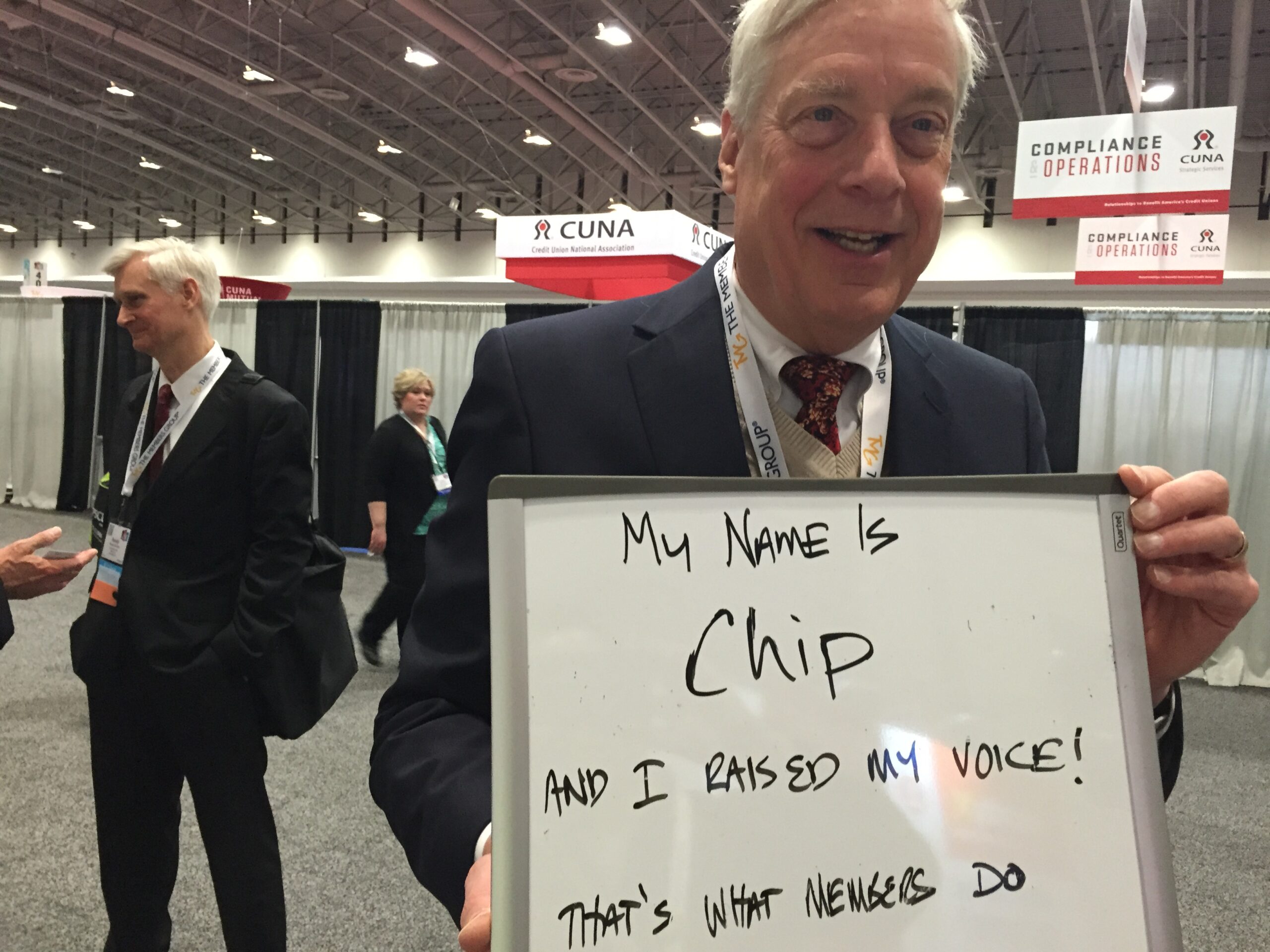 And I will continue to do so!

One Reply to “RBC/ CCULR: “The Fruit of a Poisonous Tree””