As leaders celebrate the known wins in the books for 2021, there is also the need to anticipate what lies ahead in the New Year.  Will it be better or worse?  More of the same, or changes planned?

One approach to this forward-looking exercise is situational awareness, sometimes abbreviated SA.

The concept was developed primarily by the military.  It is a skill to improve one’s ability to identify potential threats, be more ‘present’ and aware of your surroundings in combat.

The term has also been used to analyze danger in various worker environments where the potential for accidental injury is great.   Some even apply the concept to personal safety where one might be at risk such as traveling in an unfamiliar neighborhood at night.

A frequent reference to this ability to react in a situation is sports competition.

Success does not always go to the strongest or fastest athlete, but to those that have a superior “feel for the game.”

My son-in-law played offense tackle for Stanford when the team was coached by Bill Walsh, a former NFL coach,  considered a master offensive tactician.

Walsh would always script his team’s first offensive drive with 6-8 set plays so that he could see how the defense reacted.  Based on what he learned would determine how he then approached the overall game plan previously drawn up.

In basketball one of the elite players at every level was Bill Bradley who played at Princeton, for the New York Knicks as well as being the only collegiate player selected for the 1964 US Olympic team in Tokyo.

A description of his extraordinary sense for the ever-changing dynamics of the game is described in A Sense of Where You  Are, the story of his senior year at Princeton and his preternatural feel for the game.

In choosing the title, the author quotes Bradley:

“When you have played basketball for a while, you don’t need to look at the basket when you are in close like this,” he said, throwing it over his shoulder again and right through the hoop. “You develop a sense of where you are.”

At one point the author takes Bradley to a Princeton ophthalmologist to see if his skill is due to an expanded range of peripheral vision versus a normal person’s.  The tests show he has both greater horizontal and vertical  range.   But that does not explain the instinctive way he applied his talent.  That analysis takes the rest of the book!

For many their first experience of situational analysis is when a teacher claims to have “eyes in the back of her head” so you had better be careful what you do.

The Wharton Business school offers an online course which applies the theory and practice of situational analysis to business and political leadership.  The initial lecture and course description is here.

The course extends the concept  beyond its military and industrial origins to understand what happens in organizations. How do critical elements in the environment  change over time?

Many  neglect this analysis because they’re so focused on a particular plan or task that they take for granted essential factors in projecting the near future.

It’s a mindset of not paying attention to one’s surroundings.   Or as the British writer George Orwell observed: “People can foresee the future only when it coincides with their own wishes.

Situational awareness identifies the elements in the environment that are important, changing and create greater uncertainty about the near future.  No matter one’s experience in a  role,  understanding the total environment in which the organization functions is critical for effective leadership.

This analysis is front and center in New Year predictions. Or necessary anytime a future course is being planned.

The Wharton program suggests using a four-quadrant model to identify situations that are important and unimportant, and familiar to unfamiliar.

The critical events are those that are important and unfamiliar, the upper right quadrant below.  The goal is to be more aware of these challenges and take care to understand variable risks, uncertainty, what is moving around, and how to respond. 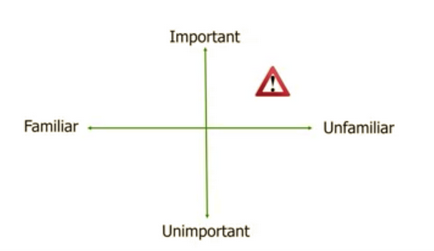 What to Place in the Critical Quadrant?

My list of evolving situations that the credit union system may need to consider differently from their 2021 experiences includes:

How any team completes this exercise depends on their role in an organization.  For those at the top, this analysis is most critical.

Bureaucracies by design are bound by organizational processes.  When complacency and habit replace vigilance, that is how an organization gets into trouble.   Situational awareness is critical to counterbalance this self-approving tendency.

Tomorrow I will provide an example of one credit union’s pivot in response to some of the factors above.    I will also share a classic example of robotic performance damaging a critical cooperative institution.