The response to my request for blog topics was blunt: “Board governance! Perhaps stemming from the frustration I feel on my own board. No relevant questions. No strategic discussions. No pressing in on how we can be better. No self-evaluations. Credit unions won’t survive with boards who simple show up and say aye.”

Then I learned how one election stimulated a complete renewal of the board’s role.

Frontwave Credit Union CEO Bill Birnie was “stunned” to learn the number of members who applied to compete for three open board seats in the 2021 annual election of directors. “Normally we have to beat the bushes for board and supervisory members.”

This year was different. The nominating committee approved ten applicants for a spot on the ballot. All submitted written statements with their professional background and why they wanted to volunteer.

Contested elections were rare at Frontwave (renamed in 2018) and even in its earlier era as Pacific Marine Credit Union.

The credit union put out its routine “Calling all Leaders” appeal in July of 2020 via email, a web posting and a member mailing on September 15. Headlines included: “Frontwave members make good leaders” “Got Frontwave Values?” “Help Members Financial Dreams Come True,” along with facts on the open positions and terms. 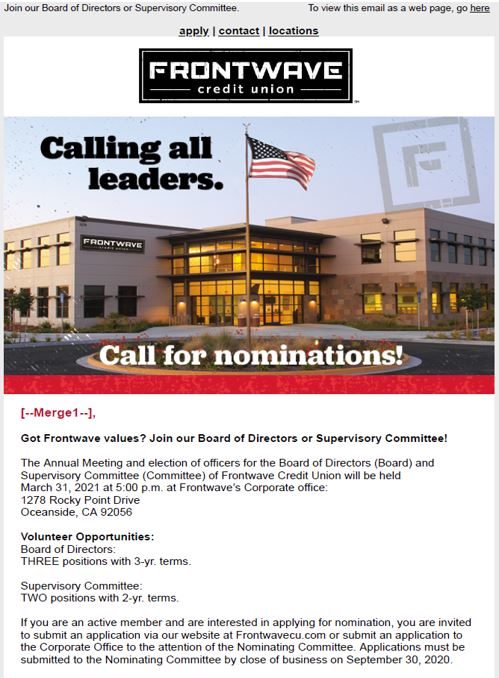 Among the applicants were nine with college degrees including four with MBAs. Their occupations included an active-duty marine, VP of finance, SVP asset-liability manager and budget analyst. Most had experience in an area of finance or management.

In addition, they were active volunteers in the community. Some examples: a college trustee, school district board member, and current board or past officer of nonprofit organizations and educational associations.

Why the Surprising Interest?

Since renaming as Frontwave, the credit union has grown over 40% to $1.1 billion in the highly competitive San Diego market. Bill, the President, had rejoined the credit union 2015 after serving as CEO for Eagle Community Credit Union. Bill believes that the dramatic increase in volunteer interest is a response to the credit union’s innovative spirit shown by its rebranding, and its increased visibility in the community with 14 branches, only five of which are on base.

The credit union’s surveys documented a 35% increase in positive member satisfaction, another factor galvanizing participation. The volunteer surge, Bill believes, reflects a growing respect for the credit union in the community.

The Vote by Members

The electronic ballot form provided an opportunity for members to comment on the voting and election process. Their comments were positive, particularly placing the candidates’ information within the ballot: 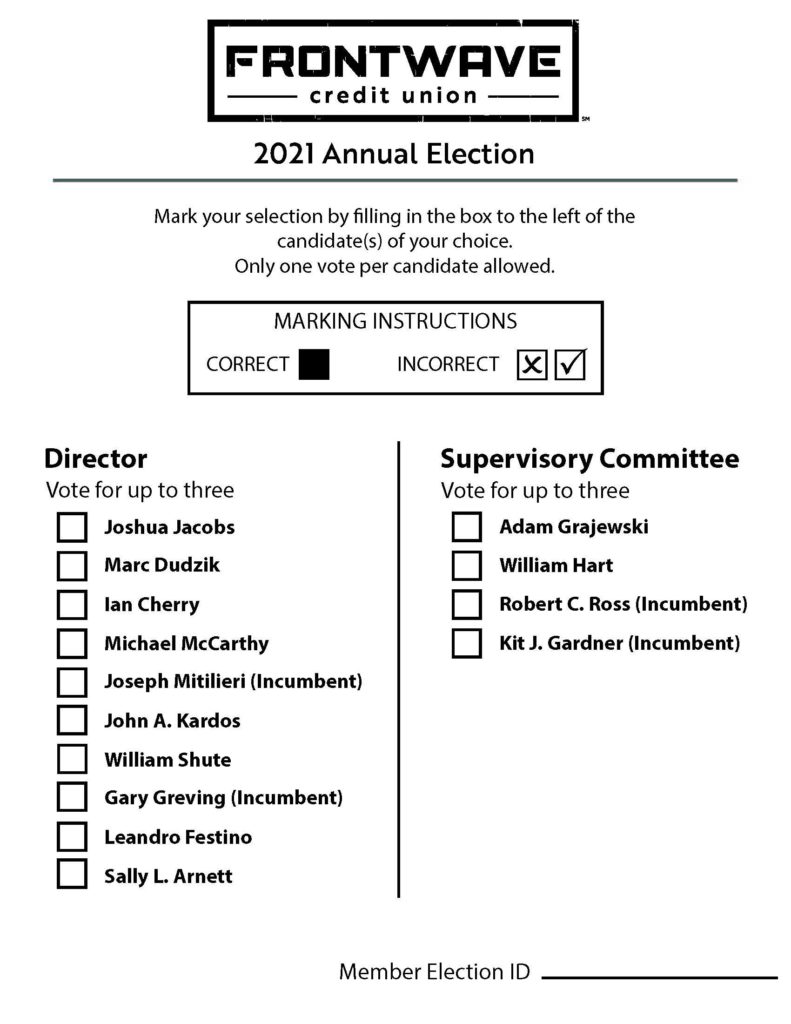 Lessons to Build On

Both management and board see this enhanced member interest as a “wake up” call for the credit union. Members were engaged in the election. The current age and tenure of the board suggests there will be more openings going forward.

The board is embarking on a self-assessment to evaluate their current skills and ascertain what the credit union needs going forward. The directors will provide the nominating committee guidance about the qualities and experiences they seek in candidates. The timeline, candidate qualifications and selection process may require further refinement with this new level of engagement.

While initially surprised, Bill Birnie now views this elevated interest as an opportunity to enhance the board’s contribution and engagement. The election has begun a process of board renewal: “We’re required to hold an annual meeting of the membership and, if needed, conduct an election. If we are going to do this, we are going to do it right.”

My reader above opined: “Credit unions won’t survive with boards who simply show up and say aye.” This example could be the best response to this “board governance” challenge.