It is the example of people willing to put limited resources to the aid of their fellow human beings in difficult circumstances. That is, the many giving others the opportunity at a better life—during the hard times of the depression.

Last year when walking in downtown Chicago, the following message on the side of a public trash unit caught my eye. 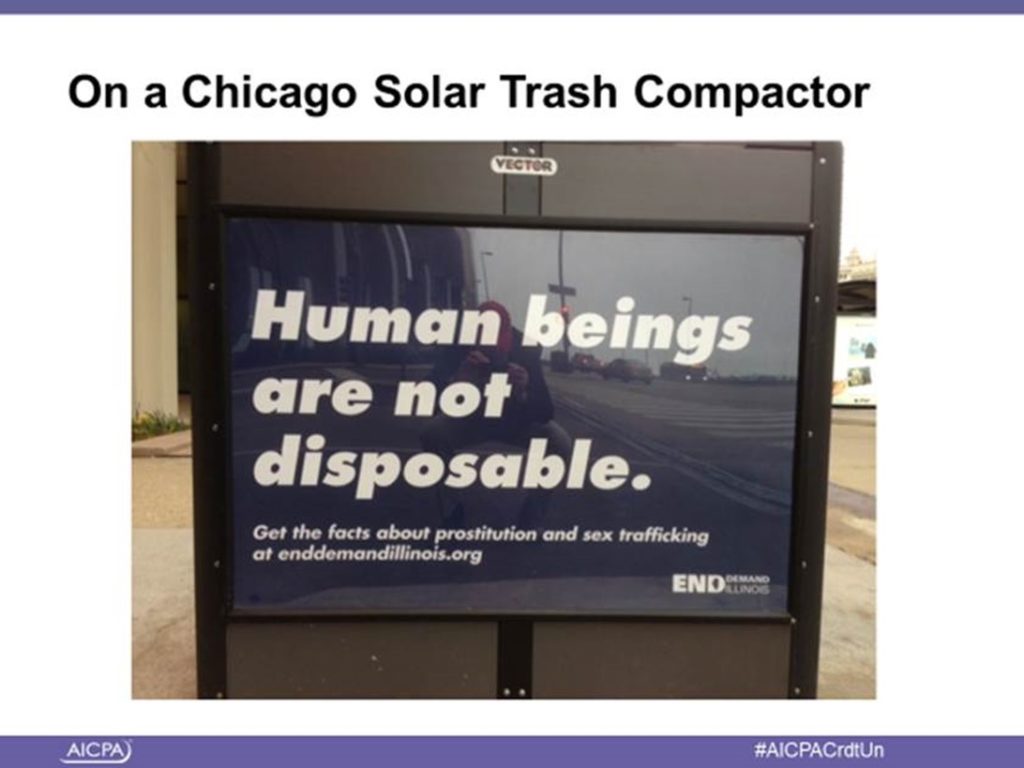 This is unfortunately one of the consequences of NCUA’s current practice in problem credit union resolution. Members with savings receive all their money back at full value. Borrowing members are sold off to the highest bidder. For savers this would be the same as NCUA transferring members’ insured balances to Wells Fargo or a finance company. Sell savings accounts for the best price and then let members work out their future relationship on their own.

Borrowers are the primary reason for a credit union. They provide the most important source of revenue. But in problem situations, the borrowing members’ fate is not NCUA’s concern. Loans are only an asset to be rid of.

This practice was most dramatically illustrated in the NCUA’s February sale of over 4,500 member taxi medallion loans to a hedge fund seeking to build a dominant share of the NYC taxi medallion market.

How This Topic Came Up Last Week

At NCUA’s Wednesday 2021/22 budget hearing, this issue was raised when one of the presenters gratuitously congratulated his organization and the Agency on this action, according to the CU Times.

The reported statements were:

“As NAFCU’s SIF Committee pointed out prior to the sale the unusually large taxi medallion portfolio would strain agency resources and pose a risk to the credit union community so long as it remained under management by the Asset Management and Assistance Center.

“While NAFCU did not anticipate a global pandemic at the time we offered this advice, we believed that retaining the portfolio in the hopes of extracting a higher sales price presented unnecessary risks, and recommended that the agency divest the portfolio at the earliest opportunity so long as it received a fair price.”

No facts were offered to support this position. The idea that the portfolio would “strain agency resources” in a $19 billion dollar fund is nonsensical. The agency two years earlier had expensed all the estimated loss–at a magnitude 4 times ($750 million) the last reported deficits ($150 million) in conservatorship.

The return on this additional cash in the NCUSIF is under 10 basis points.

Why this superfluous statement was made in a budget hearing is unclear–a crude attempt at sucking up to the Agency or poking a sharp stick in the eye of a group that challenged the sale. Whatever the reason, it not only undercuts the credibility of the presenter, but more critically it supports the unfortunate Agency practice that member borrowers are not NCUA’s responsibility, just savers.

Hiding the Truth on the Taxi Medallions

NCUA has repeatedly refused to present any details that would support its sale as in the best interests of the members. Or even the best financial outcome for the NCUSIF.

At least three organizations requested FOIA information on the sale; all denied. Some of the sale details were already published in a Feb. 20, 2020 WSJ story on the hedge fund’s purchase.

The Journal reported the price of $350 million for a portfolio of 3,000 New York medallions, 900 Chicago medallions, 500 Philadelphia medallions and 100 from other cities.

This is an average loan value of $77,800 each, all secured by medallions. An estimate of the average book value of these loans is the purchase price of $350 million plus the loss NCUA says it has taken on the portfolio of $760 million. These numbers combined total $11 billion and suggest an average book value of $245 thousand per loan. The cash received would be a payment of 31 cents per loan dollar.

What’s Wrong with Cashing Out?

The challenges of the New York taxi medallion market continue to be tracked. One example is the 2015-2020 chart below which shows the rider volumes as the uber/lyft new entrants disrupted the taxi industry. So, wasn’t 31 cents better than holding on? That is the question which NCUA and the presenter have failed to offer any factual information. 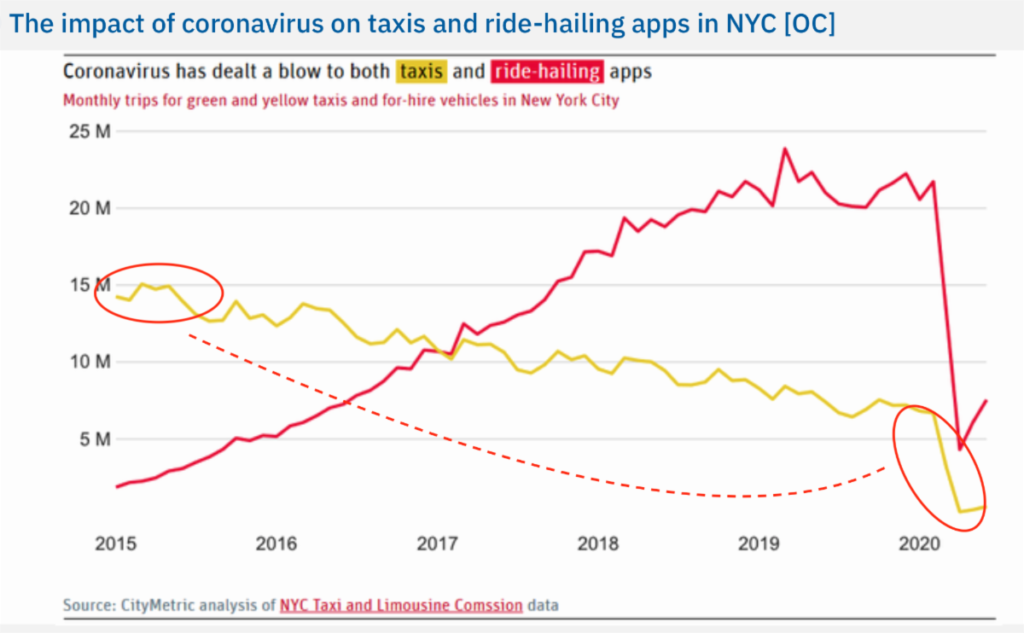 For some the chart may be a sufficient justification forgetting the fundamental rule of markets, what goes up must come down and vice versa. Cashing out at the bottom is generally the highest cost strategy—just remember the five corporate liquidations, all supposedly insolvent, whose estates have generated a surplus of over $6 billion so far.

Better options for members are what the Taxi association, CUNA and others offered to present to NCUA which refused to consider all offers. Medallion drivers, one of the most diverse group of credit union members, include many individual entrepreneurs. They were denied any ability to negotiate their own future. The sweat equity that they hoped to build was turned over to a firm that specialize in profiting from others in financial difficulty.

One Easy Solution for a Win-Win

Instead of turning its back on members striving to realize the American dream through their own labor, what if the agency had offered to discount the members’ loans to the same level that the hedge fund bought them? Furthermore, these rewrites could include a contingency that if the borrower was able to sell the medallion for more in the future, the gain could be split between the borrower and the fund.

More proposals for assistance continue to be drawn up today by the alliance and New York city leaders. Some taxi owners were able to receive help from financial programs in the CARES act. But NCUA washed its hands and walked away from the members in trouble as others attempted to find solutions.

NCUA’s lack of transparency suggests there is much to hide in its failed supervision of the taxi medallion situation and sale. The agency used money due credit unions from the TCCUSF surplus to expense $750 million to cover up their inability to carry out basic responsibilities for problem supervision and resolution.

The most unfortunate aspect of the taxi medallion sale was that it proved again that NCUA views credit union borrowers as disposable. This is exactly the opposite of the founding spirit of the Fellowship CU and the purpose for which all credit unions were formed.

December 7th is also a day that no one will forget because it brought America into WWII. A basic code of honor in the US military is that no one gets left behind whether as POWs or MIAs. Decades, even generations later, the US government sends teams to recover the remains of missing from Korea to Vietnam and other places of combat. No one is forgotten, whatever the circumstances.

That is the heart of the American democratic commitment to each other. It’s the motivation for Fellowship Credit Union, begun this day four generations ago.

Isn’t it time NCUA followed this same principle when performing its responsibilities?